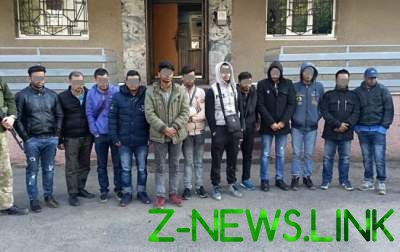 The detainees reported that they are citizens of Bangladesh.

In the Transcarpathian and Lviv region, border guards detained 17 illegal immigrants and their supporters.

It is reported that in the Transcarpathian region, border guards of the Department “Big Berezny” received information from the staff of national police that from Svalyava town in the direction of Perechyn moves the group of illegal migrants.

“Two hours of searching a joint inter-Agency group, consisting of frontier guards of Department “Big Berezny”, employees of the National patrol police on the outskirts of the village of Turia Apiary detained four Ukrainians and five illegal migrants without documents, who were driving four cars Ukrainian registration,” said the guards.

Subsequently, with the help of a service dog, the group of border guards and special forces “CORD” detained a group of 4 foreigners who also had with him the documents, then was arrested three illegal immigrants.

They were taken to the border with traffickers.

“After the personalities of detainees, they will be brought to administrative responsibility for hours 2 of article 204-1 Art. Citizens of Ukraine who tried to smuggle illegal migrants to Slovakia will be subject to criminal liability under article 332 of the UCU,” said the guards.

Also in the Lviv region, border guards at the outskirts of the village of Hrushiv was detained BMW car, where 5 Turkish citizens who were trying to get into the EU.