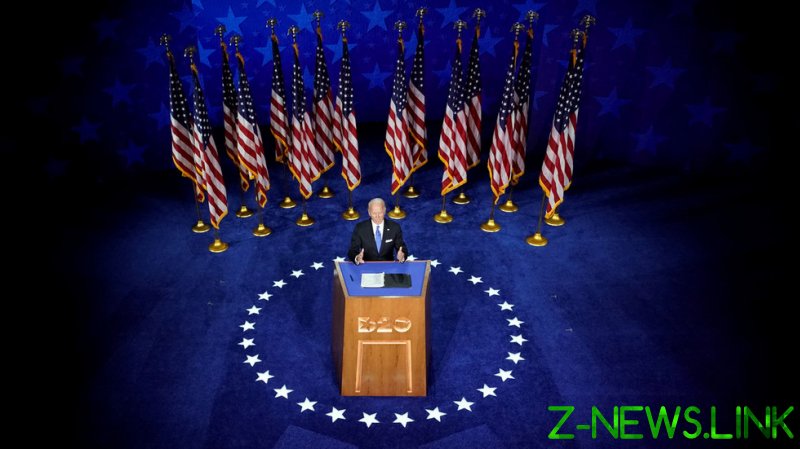 Joe Biden delivered his acceptance speech as the nominee of the Democratic Party to face off against Donald Trump in the 2020 Presidential election with all the pomp and circumstance that the Covid-19 pandemic would allow, speaking to a television audience from a podium set up on the stage of an empty theater.

Gone forever is the adjective “presumptive”; by accepting the nomination, Joe is now officially the leader of his party through the first week in November and, should he prevail in that election, for at least four years, should his health and advancing years permit.

That last fact was the elephant in every living room in America that had tuned in to watch Biden deliver his speech. Over the course of his 47-year career in politics, Joe Biden has made more than his fair share of verbal gaffes. What was once chalked up to youthful exuberance, and later a quirky manifestation of a “direct” style, has recently been highlighted by his political opponents as the inevitable decline of a 77-year old brain that might be better off being led off to pasture than saddled up for one more charge into the breach. “Would he, or wouldn’t he” was the question on everyone’s mind, wondering if Joe would stumble in his delivery, ending his presidential bid before it even started.

In fact, Joe Biden did much better than that, delivering a masterfully written address with the kind of energy and passion that should make those watching believe that he actually meant what he said, and was capable of following up his words with deeds. Every syllable uttered exuded the subliminal message, “Vote for me.” His loyal base—the same which secured Hillary Clinton the popular vote in the 2016 election—certainly loved the presentation, calling it “the speech of his life.”

But Joe has been alive for a long time, and American politics have an elephant-like tendency for remembering the past while considering the present and contemplating the future. Biden spent a considerable amount of time attacking the policies and character of the man he is seeking to unseat, going after President Trump by name and reputation. Under normal circumstances, such a tactic would bode well, given the reality of Trump’s record as a Chief Executive and a human being over the course of the past three-plus years. From Trump’s muted response to the Charlestown marches of the Ku Klux Klan and white supremacists, to the Trump administration’s fumbled actions regarding the management of the national Covid-19 response, Biden’s speech writers were given a plethora of material to work with, most if not all of which hit home to some degree.

If Joe Biden was living in a political vacuum, he might be able to throw stones at will when attacking the record of the current resident of 1600 Pennsylvania Avenue. But when one resides in a large glass house 47 years in the making, throwing stones is not the wisest of strategies. For every policy that Biden claims he will improve on, the question must be asked why had he not acted on it in his previous life as a senior senator or as vice president of the United States?

For every dig he made about Trump and racism, Biden needs to escape the shadow of the 1994 Crime Bill he helped write. For every comment uttered ostensibly in support of the US military, Biden needs to deal with his vote in favor of the US-led invasion and occupation of Iraq.

Biden’s speech was long on rhetoric, and short on detail, especially when it came to defining the specific policies he would undertake to save America from the scourge of the Trump presidency. Instead, anyone watching Biden deliver his acceptance speech would soon be struck by a sense of déjà vu, watching a tired old politician deliver the worn-out lies, the wolf disguised as a sheep.

Biden opened his speech referencing an icon of the American civil rights movement and closed by quoting an Irish poet. Given that this was “the speech” of Biden’s “political life”, the greatest challenge for anyone who watched this speech is, once the platitudes have ceased flowing from the mouths of the partisan political talking heads on CNN, MSNBC and elsewhere, is to name either of the cited individuals, or to delineate at least five of the 20 policy initiatives Biden outlined in his speech.

The fact of the matter is that all but the most fanatic of Biden supporters would be challenged to do so, because the reality is that, for all the hoopla surrounding its flawless delivery and flowery prose, the speech itself was eminently forgettable–no one will be plucking quotes from this address to challenge the gravitas and meaning of the words carved on either the Lincoln or Jefferson memorials.

It was a decent speech, well delivered. But it’s greatest detriment was that it was Joe Biden delivering it, a man with a 47-year political history that cannot simply be swept under a rug while his political handlers seek to roll out a “new and improved” model. At the end of the day, it is the same old Joe. And, even though he did a good job of reading words written by someone else off of a teleprompter for a television audience, that simply may not be good enough come November.