Home / WORLD / Biden wasn’t kidding when he said ‘nothing would fundamentally change’ under his presidency. Only the media spin is new

Biden wasn’t kidding when he said ‘nothing would fundamentally change’ under his presidency. Only the media spin is new 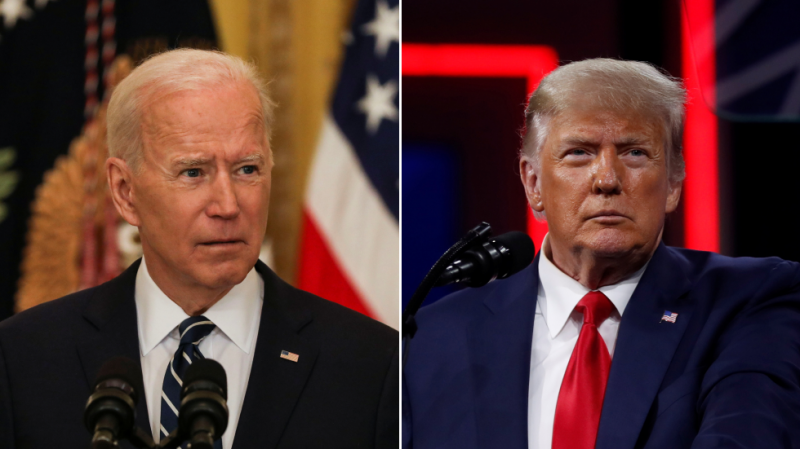 As Biden’s crew sauntered into the White House in January, one could almost hear an audible sigh of relief as the White House press corps, tasked with maintaining laser-like focus on every faux pas, fart, and flip-flop of the Oval Office’s previous inhabitant, understood they could finally relax. Biden was not to be given such obsessive treatment – he’d dutifully played the game for decades and had earned his reward. The self-styled DC “prostitute” would live out his twilight years LARPing as “President” in a White House actually run by his VP Kamala Harris alongside the Democratic Party’s Clintonite faction, the Obamas, and a detachment from Wall Street and Big Business slightly different than the detachment that had called DC home under Trump.

To anyone arguing “But surely there are some differences! Why would they fight so much if there weren’t?!” I invite you to watch a few hours of professional wrestling.

The same policies that had half the country frothing with rage under Trump will continue under Biden, without the froth. The journalists who drove themselves halfway to rabies over Trump’s supposed fascism have been given their marching orders: take a Valium and relax. File a cute story about the Bidens’ dogs. #Resistance accomplished.

If that sounds like a letdown, it should be clear by now that none of the theatrics used to bring down Trump had anything to do with the ex-president’s policies (many of which didn’t come from Trump at all, but were holdovers from the Obama administration and the Bush-era neocons who gave us the War on Terror, that maniacally evil gift that keeps on giving). Trump was a spectacular figurehead, an Emmanuel Goldstein par excellence for American liberals to target with their ’Two Minutes Hate.’ But now that “America’s back,” the rage is being placed on the back burner for a few years.

How much is that democracy in the window?

Under the rapidly-dissipating fog of January 6th’s ‘Baby’s First Insurrection™,’ it’s as if the media establishment pulled a giant switch, disabling the ability of its reporters to critically cover the once-candidate, now-president they had worked so hard to elect. From here on, it would be all peppy features about Kamala Harris’ shoes (how d’ya like THOSE boots stomping on your face, forever?!) and deep dives into Biden’s dogs and the things they like to bite (who knew Secret Service agents tasted so good?!)

None of this can remotely be classed as ‘news,’ which is fine – the news coming out of the US right now is dreadful, and the last thing the Biden administration wants is to be blamed for the combination of economic catastrophe, race war, societal breakdown, and fascist putsch that has been underway for months, gaining strength as the newly elected president and his administration chortle their way to the bank.

As Biden told his Wall Street pals during a fundraiser in 2019, “Nothing [under a Biden presidency] will fundamentally change”. They liked what they heard and opened their wallets. Now they’re getting what they asked for – more war, a hefty low-income labor force in the form of wave after wave of illegal immigrants, a continuation of Covid-19 fearmongering, and most of the other Trump policies hated by the ex-president’s populist base but loved by his plutocrat backers. The only “change” to be expected under Biden – as under Obama – is how Trump’s policies will be covered by the formerly antagonistic media, now that they’re Biden’s policies.

“How DARE he put kids in cages! I mean, concentration camps!” is smoothly transitioned back to “look at what a nice guy he is, helping those sweet little migrant kids avoid Covid-19! What are you, some kind of RACIST?!”

Never mind that the border conditions are actually worse now than they were under Trump. By repeatedly, creepily insisting during the first proper press conference of his presidency on Thursday that it was his own “nice guy” persona that had pied-pipered thousands of hapless Hispanic kids to the border, Biden all but admitted his post-inaugural executive orders had been a deliberate dog whistle to every coyote in Central America and Mexico, tipping them off that now was their chance to cash in on as many new arrivals as possible whose parents they could con into sending their kids north for a laughable excuse for a “better life.”

And never mind that unlike under Trump, journalists have been barred from even photographing the overcrowded, plastic-covered “pods” in which children are being forced to spend nearly twice as long as legally permitted. Under Biden, the journalists (and the agencies who are supposed to give them information) don’t even want to do their job!

We have always been at war with Eastasia

One of the first manufactured controversies of Trump’s orange-tinged Reign of Terror concerned the impact his perceived lack of professionalism and general political know-how would have on how the US was regarded abroad. There were fears his fragile ego and juvenile tweet-storms would land the US into a nuclear war or three, just because some tin-pot dictator in a country he couldn’t find on a map had insulted his manhood in the midst of a late-night social media sparring match.

Yet it’s Biden who has proved puzzlingly incapable of taking criticism or even coherent commentary in stride. The former VP has insisted on rewriting history – specifically, that brief period during which the US had contemplated “resetting” its relationship with Russia, reasoning (quite rightly) that China was breathing down both of their necks and perhaps it might be a good idea if they worked together. However, Biden insisted on recasting the conversation he’d had – then as VP bearing the proverbial olive branch – with Russian President Vladimir Putin, arguing that on a mission of peace he had for some reason accused Moscow’s man of having no soul.

Of course, Biden is somewhat notorious for rewriting old conversations (or reinventing the past entirely, as in his infamous and wholly fictional involvement in the US civil rights movement makes clear.

Had Biden made such a comment to a less even-keeled leader, or one who was less clued-in regarding old gaffe-prone Uncle Joe’s mental shortcomings, the remark might have landed very differently indeed. More disturbing was the fact that a journalist’s throwaway comment was the only provocation behind Biden’s remark. If he can be so easily led to spit out ‘fighting words,’ perhaps it is he, not the American people, who’ve had a little too much First Amendment this time.

Because it’s not just foreign policy that is getting the Alice in Wonderland treatment as the media tries vainly to cover its newly-inaugurated pig in lipstick. Trump, the president whose tendency toward exaggeration (and whose enemies’ tendency toward reactive exaggeration) spawned the terms “alternative facts” and “fake news” as journalists tried to keep up with him, was fact-checked almost every minute of his presidential term as writers competed to slap “pants on fire” graphics on the most innocuous statements. Biden, on the other hand, has had journalists helping him along every step of the news cycle, Weekend-at-Bernie’s style, as writers try to prop up their own ailing narratives while preventing their central figure from collapsing.

Stretching his words are ‘journalists’ who have now opted not to class ‘things the president says’ as ‘news’ at all, relieving them of the need to hold his remarks to such a high standard. If Biden lied, it must have been a mistake, or he surely meant it as a joke (why does he keep referring to entering the Senate 120 years ago?), or maybe just another bit of plagiarism (old habits die hard!). After all, one of the things Americans are told they love about Biden is his honesty, and polls would never lie!

Trump, despite regularly paying lip service to free speech, never lifted a finger to defend his followers as thousands of them were deplatformed from Facebook, Youtube, and Twitter. Biden has been even more open about his antipathy toward free speech, and his administration is positively giddy about the prospect of declaring wrongthink-prone Americans domestic terrorists. Both wings on the American vulture – sorry, eagle – know on which side their bread is buttered, and Big Brother will never dump Big Tech. For the government to retain on-demand access to a vital pipeline that can be used as an end-run around not just the First, but also the Fourth Amendment is an asset whose value cannot even be calculated by traditional means.

Thus, while the US pretends to say sayonara to the perils of wrongthink, wielding a big stick to keep Americans in line, there remains no difference between the Bad Orange Man and the grizzled grey grandpa incapable of successfully negotiating a flight of stairs. Americans owe it to their children, their parents, their fellow human beings all around the world to take back control of this nightmare. Whoever’s at the helm, the result is a never-ending series of atrocities.

Tags biden change fundamentally kidding nothing under would