Home / WORLD / Biden stands by ‘hard and painful’ evacuation from Kabul, could back sanctions on Taliban ‘depending on the context’

Biden stands by ‘hard and painful’ evacuation from Kabul, could back sanctions on Taliban ‘depending on the context’ 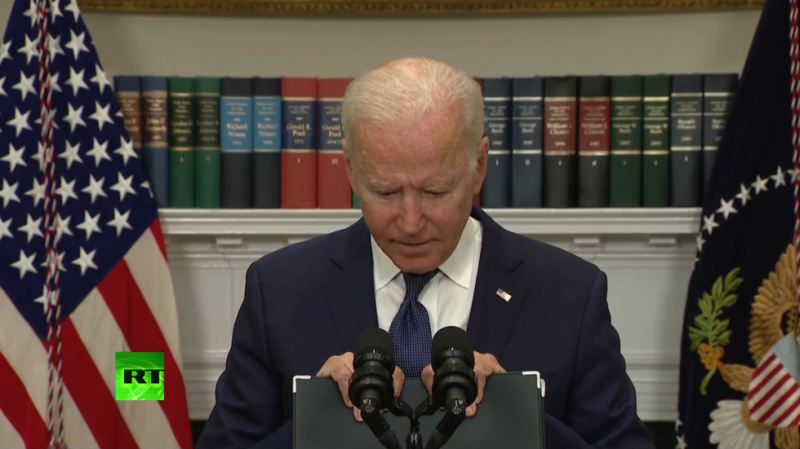 The American military airlifted some 11,000 US citizens, NATO allies, former Afghan employees of the US military, and other “vulnerable” Afghans out of Kabul airport over the weekend, Biden told reporters at a press conference on Sunday.

After a week of chaos in Kabul, with the US evacuation marred by shocking images of Afghans falling to their deaths as they clung to departing planes, Biden insisted that the evacuation would have been “hard and painful no matter when we started,” a rebuke to pundits and political opponents who described the evacuation as rushed.

“There is no way to evacuate this many people without pain and loss,” Biden stated, adding that his “heart aches” for those who lost their lives at the airport.

While Biden touted the US military’s ability to move “thousands” of people out each day, several thousand Americans remain in Kabul, and have been left to make their own way to the airport. Biden refused to say whether US forces were leaving airport grounds to rescue these Americans, but said that “by and large,” Taliban fighters – who run security outside the airport – are allowing them to leave.

However, Biden’s officials have described the situation less optimistically. Speaking to CBS News earlier on Sunday, Secretary of State Tony Blinken said that the US was depending on the Taliban’s permission to allow Americans to pass through, and in an interview with ABC News, Secretary of Defense Lloyd Austin said that some of these Americans had experienced “tough encounters” with Taliban militants.

The US’ “first priority in Kabul is getting American citizens out of the country,” Biden told reporters. However, the president also outlined a system where Afghan allies eligible for US visas, as well as an unspecified number of “vulnerable Afghans” would be flown to other countries, vetted, and then shuttled into the United States to be resettled. The resettlement program, he said, “exemplifies the best of America.”

Biden has acknowledged that future diplomacy with Afghanistan will mean diplomacy with the Taliban, as the militant group seeks “economic assistance” and “legitimacy.” Biden did not say whether the US would provide the former or acknowledge the latter, noting that the Taliban’s promises have thus far been “just words.”

Depending on how a Taliban government pans out, Biden said that he would possibly support sanctions against the Islamist group, “depend[ing] on the context.”