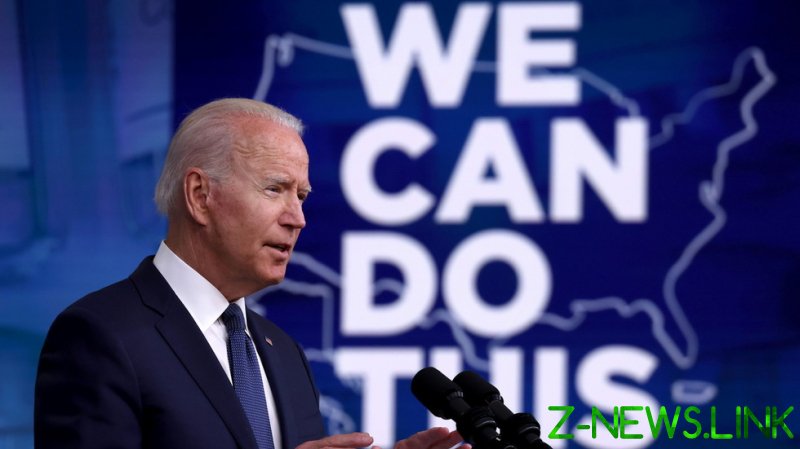 “Now we need to go to community by community, neighborhood by neighborhood and, oftentimes, door to door – literally knocking on doors – to get help to the remaining people protected from the virus,” Biden told reporters on Tuesday, adding that coronavirus “surge response teams” would also be mobilized to combat new outbreaks among the unvaccinated.

Biden’s administration is aiming to make more localized efforts, especially in areas with relatively low vaccination rates, to get the jabs to more people. For instance, it will partner with local pharmacies and family doctors to promote Covid-19 vaccines, and it will boost access to the shots at pediatrician offices.

“As we shift from these centralized mass vaccination sites…, we’re going to put even more emphasis to getting vaccinated in your community, close to home, conveniently at a location you’re already familiar with,” Biden said.

The new initiative comes after Biden fell short of his target of getting 70% of US adults vaccinated by Independence Day. About 67% of American adults have taken at least one dose, meaning the Democrat president missed his goal by about 8 million people, according to CDC data.

While Biden didn’t specify how the door-to-door interactions would play out, White House press secretary Jen Psaki said earlier Tuesday that the aim would be to ensure that people “have the information they need on how safe and accessible the vaccine is.”

It’s not clear whether that would mean sending agents to every household or somehow ascertaining which homes have unvaccinated residents. Critics said such a program could violate privacy rights and lead to other abuses or conflicts.

“Yeah, so what does this mean?” author Alex Berenson asked on Twitter. “Will the stormtroopers – I mean, friendly public health professionals – have individual-household-level data on who has been vaccinated? I’d ask Uncle Joe, but he’s busy ordering ice cream.”

Biden did, however, offer more details about the “surge response teams,” noting they would be made up of “experts” from a number of federal agencies, including FEMA and the CDC. They will help states to “prevent, detect, and respond to the spread of the Delta variant among unvaccinated people in communities with low vaccination rates,” he said.

Self-described “news junkie” Erik Sykes pointed out that if former President Donald Trump had suggested the ‘door-to-door’ scheme, “Twitter literally would not have the bandwidth to be able to display the high volume of Hitler references.”

Another commenter said that although he was vaccinated and had no side effects, he found Biden’s plan troubling. “Isn’t what the president suggests and incredible violation of privacy rights?”

Conservative activist David Bozell, president of ForAmerica, referred to the program as “door-to-door vaccine checks” and said that if Republicans don’t stop it from going forward, “they deserve to lose every election from here to eternity.”

Biden’s comments reminded other observers of a famous statement by former President Ronald Reagan: “The nine most terrifying words in the English language are, I’m from the government, and I’m here to help.”