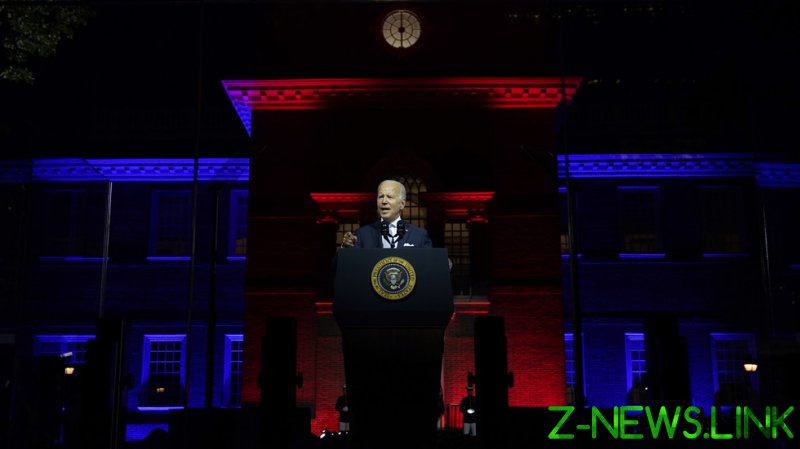 US President Joe Biden has again condemned the large chunk of the American population that supports his predecessor, Donald Trump, saying “MAGA forces” are an existential threat to democracy and must be defeated.

“MAGA forces are determined to take this country backwards, backwards to an America where there is no right to choose, no right to privacy, no right to contraception, no right to marry who you love,” Biden said on Thursday in a primetime speech, referring to Trump’s “Make America Great Again” slogan.

Speaking at Philadelphia’s historic Independence Hall, where the Declaration of Independence was signed in 1776, Biden suggested that Trump supporters aim to destroy America’s democracy. “For a long time, we’ve reassured ourselves that American democracy is guaranteed. But it is not. We have to defend it, protect it, stand up for it – each and every one of us.”

The US leader, however, made sure to clarify that not “every Republican, not even most Republicans are MAGA extremists, but the Republican party is dominated, driven and intimidated by Donald Trump and the MAGA Republicans. And that is a threat to this country.”

Biden then urged all Americans to unite in his “battle for the soul of the nation” and “vote, vote, vote” to defeat his political opponents.

“We are not powerless in the face of these threats… And, folks, it is within our power, it’s in our hands — yours and mine — to stop the assault on American democracy,” he added.

Biden has sharpened his attacks on supporters of the former president in recent days, apparently trying to draw on anti-Trump sentiment to boost Democrat turnout at the polls in the upcoming congressional midterm elections on November 8.

Just last week, Biden likened the MAGA philosophy to “semi-fascism,” arguing that Trump supporters “refuse to accept the will of the people,” “embrace political violence” and pose a “threat to our very democracy.”

“It’s not hyperbole, now, you need to vote to literally save democracy again,” he added at the time. White House press secretary Karine Jean-Pierre told reporters on Wednesday that Biden views MAGA Republicans as an “extremist threat to our democracy.” 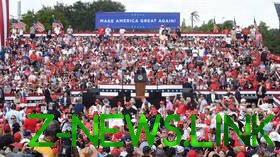 Biden’s latest rhetoric marks a further departure from his pledge to unite the politically polarized nation, even as he once again reiterated he was “not a President of Red America or Blue America, but of all America!”

More than 74 million Americans voted for Trump in the 2020 presidential election. A Yahoo/YouGov poll conducted late last month found that 54% of Republicans and Republican-leaning independents prefer Trump as the GOP nominee for president in 2024. In contrast, just 32% of Democrats want Biden as their party’s 2024 candidate.

Reacting to the White House’s previews of the president’s speech, Republican National Committee chairwoman Ronna McDaniel called him “the divider-in-chief” who “epitomizes the current state of the Democrat Party: one of divisiveness, disgust, and hostility towards half the country.”