Home / WORLD / Belarusian opposition activist stabs himself in neck with pen during court hearing, accusing officials of targeting his family

Belarusian opposition activist stabs himself in neck with pen during court hearing, accusing officials of targeting his family 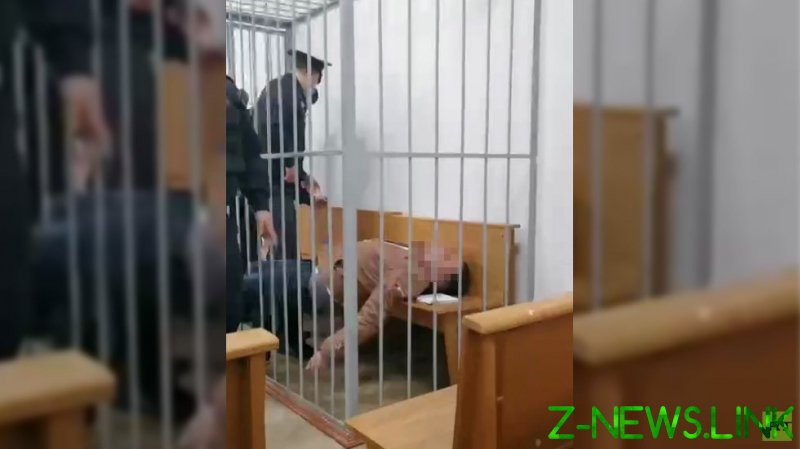 Shocking footage quickly emerged online, with reports indicating that Latypov gave a short speech from the defendant’s bench in which he accused security officials of threatening to prosecute his family if he did not confess. He was then said to have stabbed himself with a pen.

In one clip, an officer can be seen attempting to revive Latypov, while another attempts to maintain order in the courtroom. Another video subsequently showed the defendant being carried to a waiting ambulance, and reports indicate he may be put into a medically-induced coma while doctors deal with his injuries.

The Belarusian is accused of setting up a Telegram channel, making anti-government symbols and collateral, and resisting police officers during an arrest. At the same time, prosecutors claim he defrauded 16 separate organizations of 123,000 rubles ($48,500).

Latypov is a resident of Minsk’s Central ‘Square of Changes’, which had become a focal point for the long-running protests after the death of 31-year-old Roman Bondarenko, who was allegedly beaten into a coma by officers who came to remove a protest flag from the courtyard of the building where he lived.

Demonstrations have rocked Belarus since last summer, when veteran leader Alexander Lukashenko declared victory in the country’s presidential elections. The opposition, and many international observers, say that the vote was rigged in favor of the veteran leader, and tens of thousands then took to the streets calling for a new poll.