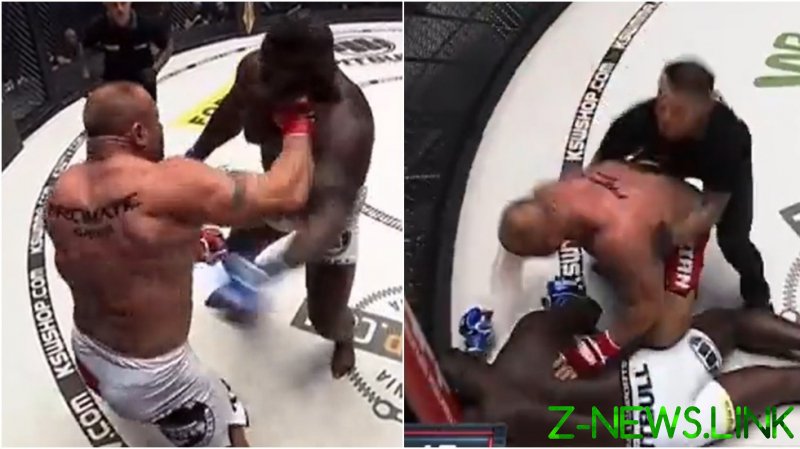 While most viewers were focused on cards from Bellator in Moscow and a UFC Fight Night in Las Vegas, hardcore MMA enthusiasts also had one eye on KSW 64 at the Atlas Arena in Lodz, Poland.

Dubbed the “Battle of the Behemoths”, one of its main draws pitted local fighter Mariusz Pudzianowski and Senegalese wrestler Serigne Ousmane Da, also known as Bombardier, against one another.

The two main weighed a near-combined 600 pounds and nobody expected it to last long.

But perhaps a little longer than 15-20 seconds, tops.

Squaring off in the center of the octagon following the first buzzer, Pudzianowski shimmied and connected with a kick to the shins as Bombardier advanced.

Retreating with his back about to be against the cage, the five-time World’s Strongest Man let off two big rights and connected with the second that immediately felled a Bombardier also swinging wildly.

Dragged off by the referee, Pudzianowski celebrated what Ariel Helwani described as the “KO heard around the world” while his foe lay out cold on the canvas.

Another pundit described it as an “unholy KO” and “unreal”.

“What a night for the MMA legends,” he added, in reference to a big win in Moscow for Fedor Emelianenko too.

“They don’t call him a strongman for no reason,” quipped a fan.

“That’s why they call him Pudzilla,” was another similar comment.

But not everyone was impressed, calling the action “underwhelming”.

“You’re hurting Pudzianowski with this opposition,” scoffed a Polish enthusiast.