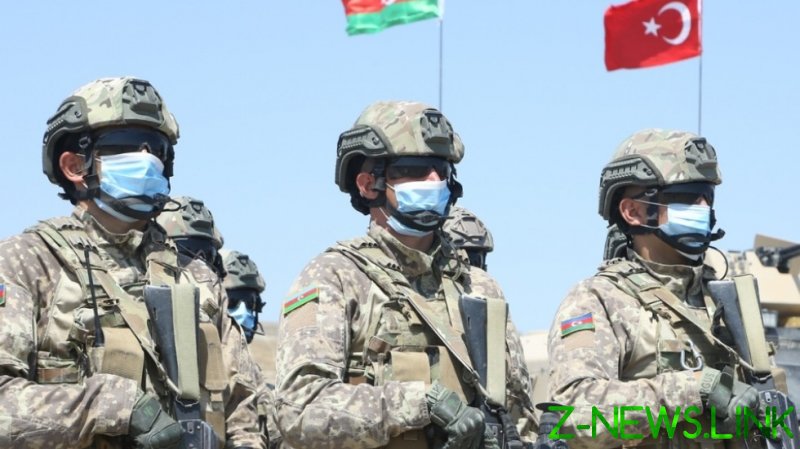 “There are ties of strategic partnership… and there are also brotherly relations between Turkey and Azerbaijan – but in this conflict Turkey isn’t involved as a third party,” Hajiyev insisted. The participation of Ankara in Baku’s dispute with Armenia over Nagorno-Karabakh – a mainly Armenian-populated region regarded as part of Azerbaijan under international law which declared independence and remains under Yerevan’s control since a 1994 ceasefire – is only of a “political, geopolitical and moral” nature, he added.

Claims of Turkey supporting Azerbaijan during a week of intense fighting on the contact line in Nagorno-Karabakh are nothing, but “cheap political propaganda by the Armenian side,” the senior adviser to Azerbaijani President Ilham Aliyev said.

Hajiyev also rejected claims that militants from Syria were deployed to rejoin the fight on the side of Baku as “fake news.” Doing so would’ve been “illogical” as Azerbaijani troops know the terrain much better and are more accustomed to fighting in mountainous areas, he explained.

The statement came just hours after Yerevan filed a request with the European Court of Human Rights (ECHR), demanding measures to be taken against Turkey over its “diverse assistance” to Azerbaijan’s attacks against civilians and other targets in Armenia and the disputed Nagorno-Karabakh.

Hajiyev slammed France’s attempts to pose as a mediator in the conflict between Azerbaijan and Armenia, saying that “it’s not acting in full understanding” of the situation and “taking a one-sided approach.”

“France was always pro-Armenian because there are 500,000 Armenians living there,” he said.

Paris, which itself has a history of relying on mercenaries during its military operations in Africa, shouldn’t blame others for such things, Hajiyev pointed out.

The Azerbaijani official has urged foreign journalists to refrain from visiting Nagorno-Karabakh “because it’s a risky zone and the Azerbaijani government can’t be responsible for their safety and security.” He accused Yerevan of deliberately “bringing journalists to very risky areas and using them as a human shield.”

The adviser reiterated Baku’s stance that it was Armenia who fired the first shots and which keeps targeting civilians in Azerbaijan. According to Hajiyev, Azerbaijan was carrying out what he called “a peace enforcement operation,” aimed at making Armenian troops withdraw from the disputed region. Only this will provide the opportunity to settle Nagorno-Karabakh in line with international law, he said.

Yerevan, meanwhile, is accusing the Azeri side of being the aggressor and attacking civilian targets in Nagorno-Karabakh and inside Armenia.

Armenian authorities earlier expressed their readiness to work with Russia, the US and France, as well as with the OSCE, in order to restore the ceasefire with Azerbaijan.

But they also vowed to use all means necessary to protect the Armenian population of Nagorno-Karabakh if Baku persists in seeking a military solution with Turkey’s help.