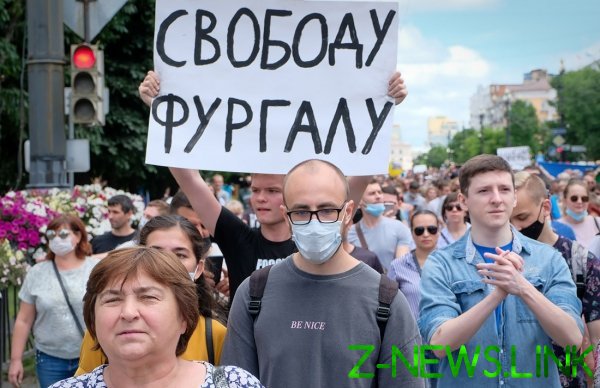 The authorities of Khabarovsk Krai in connection with the mass protests urged residents of the region not to succumb to provocations and not to make a mess because of the arrest of Governor Sergey Furgala. An appeal “not to allow yourself to use” published on the official portal of the government of the region.

“We understand the feelings of the people who took to the streets and squares. But now, two days later, we see a dangerous trend. Among the protesters there are people who are trying to provoke unrest. Some have simply “the blood”, while others, perhaps cashing in on the protest. So scores points the non-systemic opposition and bloggers, which by the vivid content, a growing number of subscribers”, — the statement says.

Officials say that it is impossible to prevent mass riots, clashes with law enforcement. “If you oppose the lawlessness, do not break the law! Remember that all mass actions not sanctioned, — indicate power. Now Khabarovsk and other cities of the region in the literal sense of “humming” night and day. Respect the silence of those who live on busy streets. First and foremost, these are children and the elderly. Once again I appeal to you not to succumb to provocations, even from the best motives, Express their civic position in a civilized way and within the law!”

Also the government of the region draw the attention of residents the increased incidence of coronavirus infection and the need to avoid public gatherings to prevent COVID-19.

The Governor of Khabarovsk territory Sergey Furgal was arrested on the morning of July 9 outside his home in Khabarovsk. He is accused of organization of murders of businessmen and attempted murder that were committed in 2004-2005. In a criminal case detained four people who, according to the investigation, consisted with Forgalom in the same OCG. The Governor did not plead guilty. The investigative Committee called the arrest of the head of region to work for the decriminalization of the Far East.

Sergey Furgal has become the first defendant in a criminal case from among the governors from the systemic opposition, won a victory over the candidates of the Kremlin in the elections of 2018. LDPR leader Vladimir Zhirinovsky said in the Duma that the Russian authorities began to act “under Stalin”, and threatened to leave the faction of Parliament.

July 10, Furgala was arrested for two months. After that, in the Khabarovsk region began unauthorized rallies and marches in support of the Governor, which was attended by tens of thousands of people. Residents chanting “Freedom to Furgala!”, “Hold on, Sergei, Khabarovsk Krai for you!”, need to return it back and claim that other the head of the region will not accept. Protests were held peacefully, was arrested only a few people.