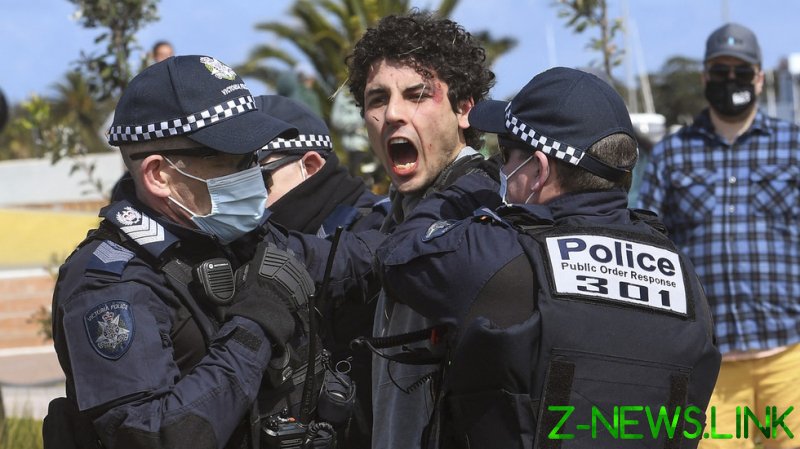 Acting Senior Sergeant Krystle Mitchell has appeared on The Discernible Interviews channel on YouTube on Friday, wearing her dark-blue uniform and revealing that she had been “troubled” by how police resources have been applied during the pandemic by state authorities.

Victoria Police has been tasked with making sure that people in one of Australia’s most populous states abide by the lockdown restrictions, and with curbing illegal protests against the health rules and vaccination mandates, which often turn violent, resulting in numerous arrests and accusations of police brutality. Melbourne, Victoria’s capital city, holds the world record for longest lockdown.

Mitchell, who had been working with the gender equality and inclusion command, said that “all of my friends that are police officers that are working the front line and are suffering every day enforcing CHO (Chief Health Officer) directions, that certainly the great majority don’t believe in and don’t want to enforce.”

The law enforcers were “scaring people in the community,” and she herself felt uneasy when encountering officers in the street while off-duty and wearing civilian clothes, she confessed.

Some rough behavior by the police during the pandemic might be partially explained by the enforcement approach taken by Victoria Premier Daniel Andrews, Mitchell suggested. “I think that the reason, or the issue, in why perhaps police [are] feeling more emboldened to act the way they are in relation to these harsher actions is because of the messaging that comes from Dan [Andrews],” who tells the law enforcers what to do “on a daily basis,” she said.

Victoria Police confirmed that Mitchell used to be one of their officers, but stressed that her comments in no way reflected the views of the whole force.

“Victoria Police cannot pick and choose what laws it enforces,” it said in a statement on Saturday, adding that the police “looks forward to the easing of restrictions and the eventual return to pre-COVID life,” just like ordinary residents do.

As for Mitchell, she would be the subject of a professional standards command investigation over her revelations, according to the statement.

Several instances of police brutality in the state of Victoria went viral in September at the height of the protests against Covod-19 restrictions in Melbourne. One of the viral clips that caused outrage featured police violently tossing an elderly woman to the ground and pepper-spraying her. In another incident, an officer was filmed slamming a demonstrator onto the pavement, allegedly rendering him unconscious.