Home / WORLD / As tensions escalate over ‘killer-gate’, Moscow snubs Biden at UN, only sends junior diplomat to virtual summit with US president

As tensions escalate over ‘killer-gate’, Moscow snubs Biden at UN, only sends junior diplomat to virtual summit with US president 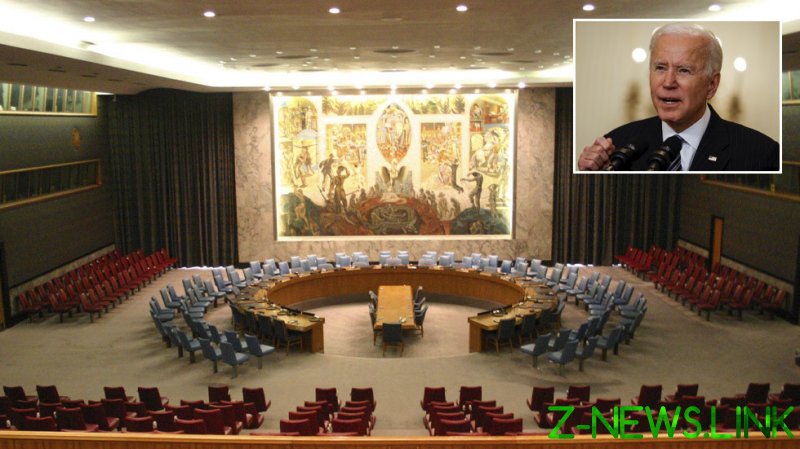 President Biden had invited permanent representatives from the United Nations Security Council, on which Moscow has continuous representation, to discuss his country’s “commitment to values-based global leadership.” In addition, the president called for action on crises in regions across the world, including Myanmar, Ethiopia, Syria, and Yemen.

However, Dmitry Polyanskiy, second-in-command to Russia’s permanent representative, Vassily Nebenzia, confirmed on Friday that neither had attended the meeting. Instead, he revealed, Anna Evstigneeva, one of three more junior deputies, had joined the talks with Biden in their place. She reportedly made no remarks.

RIA Novosti reports that Russia’s diplomatic mission was the only one that did not send its top figure to greet the American president.

The decision comes amid a week in which Biden and his Russian counterpart, President Vladimir Putin, have traded barbs in the press. In an explosive interview with ABC earlier this week, Biden was asked whether he thought Putin was a killer. “Mmm hmm, I do,” Biden replied.

On Thursday, the Russian leader responded, arguing that judging other countries is often “like looking in a mirror.”

“When I was a kid, when we were arguing with each other in the playground, we used to say, ‘Whatever you say [about others] is what you are yourself,’” Putin said.

The US is expected to unveil new sanctions on Russia as early as next week in response to claims that Moscow attempted to influence the outcome of the 2020 presidential election. A joint report by US intelligence agencies argued that a network of Russian proxies had worked with the aim of “denigrating President Biden’s candidacy and the Democratic Party, supporting former President Trump, undermining public confidence in the electoral process, and exacerbating sociopolitical divisions in the US.”

On Wednesday, Putin’s spokesman, Dmitry Peskov, denied the claims, insisting that “Russia has nothing to do with any campaigns against any of the candidates. In this regard, we consider this report to be incorrect.” Instead, he argued, the allegations were being used as an excuse to introduce new sanctions.