Home / WORLD / As students at Britain’s ‘top university’ must confess to their ‘personal guilt’ to get on campus, my advice is… fake it

As students at Britain’s ‘top university’ must confess to their ‘personal guilt’ to get on campus, my advice is… fake it 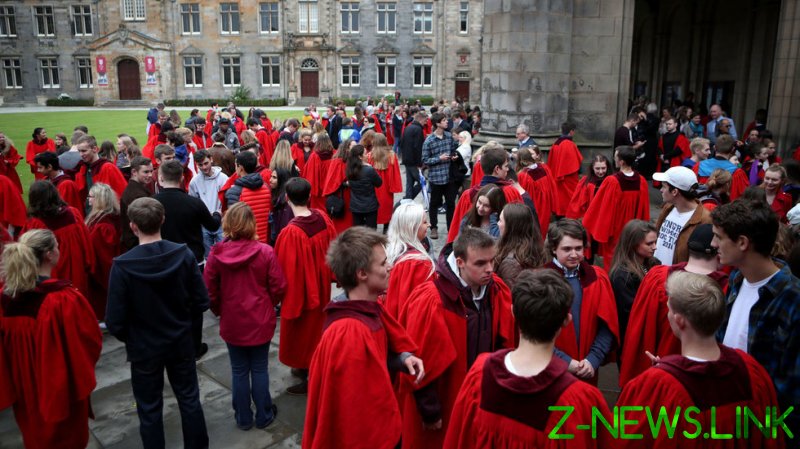 No, no, no, ten thousand times… NO! I do not accept any kind of ‘personal guilt’ – no matter how hard the wokeys with their fascist tendencies push and push and push.

Let me explain some fresh wokeist nonsense that’s pretty much guaranteed to have you scratching your head in ‘wtf?’ disbelief. New arrivals at the University of St Andrews in Scotland have been told they must ‘pass’ diversity and consent modules in order to get through the door. They can even be marked ‘wrong’ if they refuse to accept ‘their personal guilt’.

Here’s a few of these questions, see what you think:

‘Acknowledging your personal guilt is a useful start point in overcoming unconscious bias.‘ If the pupil disagrees, they’re marked ‘incorrect’.

This one’s easy. ‘Does equality mean treating everyone the same?’

Err, yes? Ah ha, no! It was a trick question. The poor student gets this message: “That’s not right, in fact equality may mean treating people differently and in a way that is appropriate to their needs so that they have fair outcomes and equal opportunity.”

Fiddle the books in favour of one person over another, is what that ACTUALLY means. But don’t think it’s gonna fall in your favour if you’re white, middle class and male. You’re doomed. Your future is bleak because the past was so rosy for your predecessors, and you have to pay the bill. Sorry!

And what about women, girls, the female of the human species? Sorry, I mean ‘person with a womb’. The wokeys wanna cancel your gender entirely, just to protect the feelings of a tiny minority of trans women (people born male but who now identify as female, they’re the ones making all the noise). There are barely enough of these people to fill a small town.

“It is important to think about and understand our own prejudices and stereotypes so we don’t treat someone else unfairly or inappropriately,” the quizmaster declares. Again, don’t hold your breath if you’re a white bloke.

Apparently St Andrews has actually been doing these tests for years but it only came to light this term. Whatever.

The University of Kent probably has the highest high water mark when it comes to the sheer volume of woke idiocy on campus, the place in Canterbury is flooded with it. If you go to study at Kent, you could be told that wearing second hand clothes is… wait for it… a sign of ‘white privilege’. Unpick that if you wish, but no matter how you turn it around and examine it – it will never make any real sense. Not if you’ve spent any quality time out in the real world with the rest of us.

A political professor at Kent was even hounded by the woke mob after he confessed to the sin of not even voting for Brexit, but just accepting the result. Err, that’s kinda the inconvenient central core of democracy, wokeys, the right to make a choice. Even if you don’t agree with someone else’s choice, accepting it is kind of part of the deal.

St Andrews isn’t some Mickey Mouse uni, oh no. This year it knocked Oxford and Cambridge off the top spot in the Good University Guide and the future King met his wife there. I demand a recount. The University of Kent, by the way, was ranked at number 46.

I did an unconscious bias training course a little while ago, to see what it was all about. And I learned that I am a bit biased against some people – Manchester United fans, mostly, for their football privilege. We are all biased, in one way or another. A black guy may really despise another black guy, a lesbian may dislike another lesbian, etc. Ad infinitum.

So what? What does it mean? It’s part of being human. There’s no cure for life.

This woke stupidity is clawing its way across the planet worse than Severe Acute Respiratory Syndrome Coronavirus-2 (SARS-CoV-2). But it’s not just academia, it’s infecting the workplace too. I know loads of people who have had to sit through one of these dopey courses in an office training room, or sit and tick the boxes online.

Pretty much to a man and woman – black and white, straight and gay – they told me it was a ‘load of old bollocks’ and they just sat through the thing because they had to, trying to stay awake. Before departing having, like me, learned not much they didn’t know already. Still, it kept the bosses happy. Some quota somewhere was now filled, some box firmly ticked.

The onslaught faced by university students though, to my mind, is very different. It’s far more insidious. These are teenagers, for the most part, living away from home for the first time in their lives. Rich pickings for a bit of indoctrination.

As one St Andrew’s student who sat the test told The Times: “I wasn’t happy with it, effectively you had to agree with what they’re saying and these statements weren’t factual things, these were opinions… It seems like they [the university] are pushing an agenda and it appears performative and contrary to academic freedom and freedom of thought.”

Well exactly, this girl has more sense than all the faculty staff put together.

You know what, though? My advice to these youngsters is: fake it, fill in the ‘correct’ answers – they’ll be obvious, aside from any trick ones, any dope can spot what the thought police want you to say – float through these dumb tests and go about your college years safe in the knowledge that they mean… absolutely nothing. They can’t get inside your head, not yet.