Home / WORLD / As Merkel fashions her exit, the blocking of RT’s German-language YouTube may not be the only Russia crisis her successor inherits

As Merkel fashions her exit, the blocking of RT’s German-language YouTube may not be the only Russia crisis her successor inherits 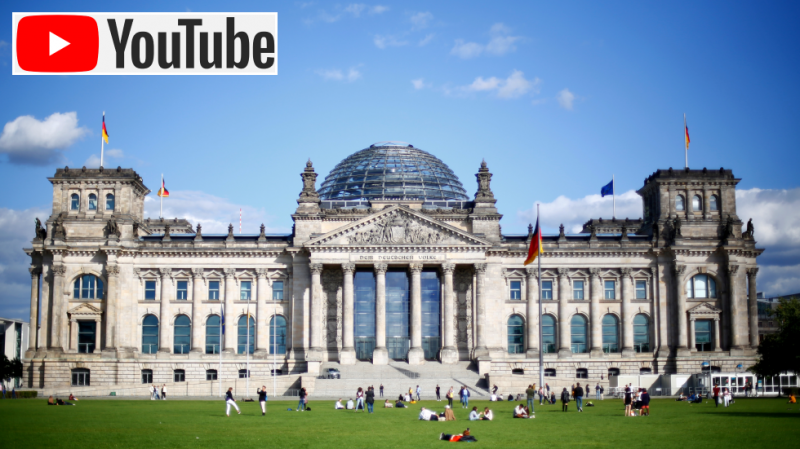 On Tuesday, YouTube banned two channels belonging to RT’s German-language affiliates in a move that the Russian Foreign Ministry has said amounts to “censorship” and “aggression.” The response has been furious, with Moscow threatening to block the site altogether and insisting it could have only taken place with the “obvious connivance, if not at the insistence,” of authorities in Berlin.

This has been denied by German officials.

Moscow has laid down the gauntlet, saying that it could impose “reciprocal measures against German media in Russia.” According to its diplomats, these outlets have “been repeatedly shown to have interfered in our country’s internal affairs.”

Given RT DE became one of Germany’s most popular news sites in the lead up to the election, a number of commentators have been quick to make out that the decision was a political one, despite Berlin’s denials. It is not, however, the only issue set to strain relations between the two countries, but it is another sign that the careful balancing act Merkel had perfected is looking increasingly wobbly.

Konstantin Kosachev, the former chair of the Foreign Affairs Committee of the Federation Council and now vice speaker of the latter, has warned he sees little hope for a general improvement in the relationship between Berlin and Moscow. His main worry is that the next foreign minister is likely to be a member of either the Green party or the FDP – in essence, Germany’s market liberals. Both, he fears, are ill-disposed toward Russia.

Kosachev’s concern is plausible. Both the Greens and the FDP stress liberal ‘value-and-rules’ rhetoric and are highly critical of Russia. The Greens in particular are far from their pacifist, anti-NATO origins. The party now has a pronounced interventionist streak, is “Atlanticist,” loyal to the American-led bloc above all else, and, last but not least, has cultivated a special, naive relationship with post-2014 Ukraine.

After last Sunday’s vote, a renewal of the ‘Great Coalition’ between the conservatives (CDU/CSU) and the moderate Left (SPD) is unlikely. While it would command a majority of seats in Germany’s parliament, both sides have made it clear they are not interested. That leaves only two realistic options of forming a majority that can choose the chancellor: Either a coalition between the CDU/CSU, led by its candidate Armin Laschet, the Greens, and Germany’s market liberals (FDP) or between the SPD, led by Olaf Scholz, and, again, the Greens and the FDP.

In German, these three-party coalitions are named after the combined brand colors of their parties. In the case of the CDU/CSU-led variant, they resemble the flag of Jamaica, thus ‘Jamaica’ coalition; the coalition led by the SPD has colors reminiscent of a (German) traffic light, thus ‘Traffic Light’ coalition. Unless there are major surprises, one of these two will end up in charge.

As Kosachev has noted, this means that we already know with a high degree of certainty that the Greens and the FDP will be junior partners, with the foreign ministry usually going to a junior partner.

Yet there are more factors to consider. What else can we say at this point?

First, the one thing that would have been most likely to lead to changes in German policy toward Russia will not happen, namely a Left-Left-Green coalition, including in addition to the SPD and Greens, the decidedly left Die Linke (‘The Left’) party. After results that the Linke leader has publicly called’beschissen’,(very bad indeed in informal German), this variant is unviable.

Second, ‘Jamaica’ and ‘Traffic Light’ are not equally likely. ‘Traffic Light’ has better chances, for two reasons: its potential leader Olaf Scholz, though far from an absolute majority, has won the election (with 25.7%), if by a slim margin, while the alternative leader, Armin Laschet has lost (24.1%). Moreover, the SPD has clearly gained votes by comparison with the last federal election (+5.2%), the CDU/CSU has badly declined (-8.9%); in fact its result is a historic fiasco.

Against this background, while it would be legal for Laschet to build a coalition and become chancellor, it would be highly counter-intuitive for many Germans, to say the least. It would be an especially hard sell for the CDU/CSU’s potential junior partners, in particular the Greens, because the SPD is ideologically closer.

Add the fact that even if the two parties are both necessary to form any coalition, the Greens have more votes (14.8%) than the FDP (11.5%). That is not legally binding, but it makes it even more difficult for the Greens to agree to ‘Jamaica’.How would their leadership explain such a concession to its own party members and voters?

Disregarding their likelihood, what would ‘Jamaica’ and ‘Traffic Light’ mean for the relationship between Berlin and Moscow?

Let’s start with the less likely one: If ‘Jamaica’ prevailed against the odds, overall German policy toward Russia would not change. Laschet has been suspected of “being soft on Russia,” but that is a hostile exaggeration. In reality, he is a pragmatist who would follow precedent by combining dialogue with some criticism and confrontation. He would not allow his foreign minister, whether from the FDP or the Greens, to escalate conflict with Moscow, at least not beyond mere words to satisfy the expectations of the respective party’s domestic audience.

At the same time, while seeking relations with Moscow at least not worse than now, he would not risk any tension with his coalition partners, the USA, NATO, or those members of the EU keen on a hard line toward Russia.

A German foreign minister can be a strong figure with his (or her) own signature line, but that is not necessarily always the case. And even a strong minister is not able to treat foreign policy as a personal or party fiefdom, at least not for long. (Even the exceptional late Hans-Dietrich Genscher was not.) German notions of “cabinet discipline,” the necessities of coalition politics, and, last but not least, the chancellor’s constitutionally protected right (and responsibility) to set the overall guidelines of policy militate against such a degree of independence.

The upshot of all of the above is that a Laschet government would, for instance, be as unlikely to aggressively push for lifting sanctions on Russia as to attack the Nord Stream 2 pipeline.

Clearly, Germany’s relationship with Moscow also always depends on its other international ties, especially that with the USA, China, and the other EU states. In that regard as well it is hard to see how a Laschet government would make much of a difference: It would be dogmatically “Atlanticist,” that is, fail to acknowledge Europe’s urgent need for security independence from an unreliable US. With regard to China, some observers believe that both the FDP and the Greens would push for a more confrontational attitude.

That may well be true, perhaps not unrelated to the fact that both parties have not been in power (at the federal level at least) for a while and find it easy to nurture ideological illusions of how much the West can do to insist on its ‘values’ and ‘rules’.But while there might be more grandstanding, reality is likely to prevail: In that area, Germany under Laschet would do what Germany is doing now: strike a balance between maintaining good relations with China to help trade and trudging along very reluctantly when the US pushes for its new ‘Cold War’,this time against Beijing.

It is not only economic interests, moreover, that hold any German leadership back from getting too ‘tough’ on China; like a majority of Europeans, German voters simply don’t want to take part in that new Cold War, as polls clearly show.

While Berlin’s balancing act is getting more difficult, under Laschet, it would cling to it as long as possible.

What about the more likely coalition outcome, ‘Traffic Light’,led by the SPD and Olaf Scholz? At first sight, not that different: No sudden steps to improve relations with Moscow are likely, no principal challenge to “Atlanticism” will occur, China will remain a de facto partner, but also the object of criticism. American policies to escalate tension and conflict with it are likely to encounter a tad more resistance. But, again, in the end, a German government based on a ‘Traffic Light’ coalition and led by Olaf Scholz will also try to balance, as long as it can, a reasonable attitude toward China with America’s desire for more confrontation.

Yet there are differences hidden in the details. For one thing, foreign policy has played almost no role in the elections, notably neglected in debates. Thus, even with the Greens and the FDP having tougher ideas about Russia (and China), if their behavior before the elections is anything to go by, then it is by no means clear that they will try to act on them. Obviously, a party that captures the foreign ministry would have to occupy itself with foreign policy. But it may still choose to be cautious, so as to not endanger its domestic policy agenda.

Second, the SPD cannot but carefully analyze its electoral success, and much of it was due to a shift in those German Länder that used to belong to the former East Germany. That, in turn, has implications beyond this election: If the SPD wants to maintain its comeback, it cannot disappoint eastern Germany. The key expectations it will have to satisfy there are domestic, concerning social welfare, including pensions, and infrastructure. But the population of the former East Germany also tends to be more positively inclined toward Russia than that of the former West Germany, as polls keep showing. The SPD has good electoral reasons to tread carefully in that area.

Third, concerning the US, the SPD’s “Atlanticism” could turn out less doctrinaire than that of the conservatives, in particular with respect to one important issue that the next government is likely to have to address: To replace or not Germany’s small fleet of dated Tornado jets. These planes are of special political significance because they can carry (American) nuclear weapons, which means that they are crucial to the policy of ‘nuclear participation’.

The SPD, unlike the CDU/CSU, includes strong critics of this Cold War policy, which only a little more than a year ago led to intense arguments in the then-ruling Great Coalition with the CDU/CSU. Yet replacing the Tornados will be costly. But Olaf Scholz has promised to offer more welfare. If he manages to build a coalition, it will include the FDP. Yet the FDP hates taxes. In sum, it is possible that, under a ‘Traffic Light’ coalition, the Tornados, the bombs they are meant to carry, and the dated policy of ‘nuclear participation’ could fall victim to a combination of principal criticism and the need not to waste money, which would complicate the relationship between Washington and Berlin.

Whichever coalition emerges, sudden moves, for better or worse, are unlikely. But while there are some things that mean Germany will want to preserve and even strengthen its relationship with Russia, there are more than enough powder kegs to threaten its foundations, as this week’s developments have shown.