As German military plane FAILS to land in Kabul, Merkel calls US-led Afghanistan mission ‘NOT AS SUCCESSFUL’ as hoped 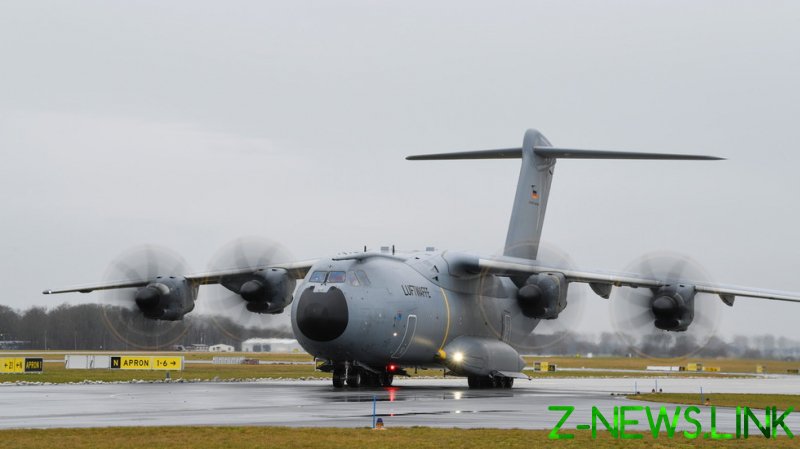 Three Luftwaffe Airbus A440M transport planes took off from Wunstorf, in Germany, on Monday, bound for Kabul. Carrying paratroopers for security, the aircraft were set to evacuate German diplomats and citizens stranded in Afghanistan following the Taliban’s swift takeover of the country.

However, Kabul airport was overrun with crowds of Afghans desperately attempting to hitch a ride out of the country on American military aircraft, or one of the few grounded commercial planes remaining on the tarmac. As a result, the first of the German planes was unable to land, Lieutenant General Markus Laubenthal told broadcaster ZDF.

As the first plane was diverted to Uzbekistan to refuel, the German military posted an update saying the second A440M was circling overhead, but it, too, was prevented from landing due to the masses of people blocking the runway.

The end of Germany’s diplomatic mission to Afghanistan followed the same trajectory as the American retreat from Kabul: a reduction in embassy staffing followed by a relocation of diplomats to the airport, and concluded with the flying in of troops to secure a hurried evacuation.

German Chancellor Angela Merkel is a rare Western leader in that she has been in power for nearly the entire duration of the war in Afghanistan, having taken office in 2005. Speaking to reporters on Monday, Merkel celebrated the fact that her country’s military intervened to stop Al-Qaeda from repeating its September 11, 2001 attacks on the US, but remarked that “everything else that has followed has not been as successful and has not been achieved in the way that we had planned.”

The Taliban’s return to power was “particularly dramatic and terrible,” she said, adding her commiserations to the families of the 59 German soldiers who died in Afghanistan over the course of the two-decade war.

In addition to its own diplomats and citizens, Germany intends to evacuate locals who assisted its armed forces. More than 1,800 of these Afghans and their family members have already arrived in Germany, out of an expected group of nearly 2,500, according to the German military.

However, Merkel plans on rolling out the welcome mat to around 10,000 Afghans in total, she told her party colleagues at a meeting on Monday. These would include activists, lawyers, and others deemed at risk from Taliban rule, Reuters reported.

Merkel appears unwilling to repeat her 2015 decision to welcome in refugees and migrants en masse. Back then, more than a million, coming mostly from Syria, the Middle East, and North Africa, settled in Germany. A spike in crime followed, and her decision badly damaged her standing in polls. During the news conference on Monday, Merkel called on other countries to fund the resettlement of Afghans in neighboring countries, and her colleagues stressed that another refugee influx wasn’t on the cards.

“For us, it is clear that 2015 must not be repeated,” Paul Ziemiak, general secretary of Merkel’s Christian Democratic Union party, told broadcaster NTV. “We won’t be able to solve the Afghanistan question through migration to Germany.”