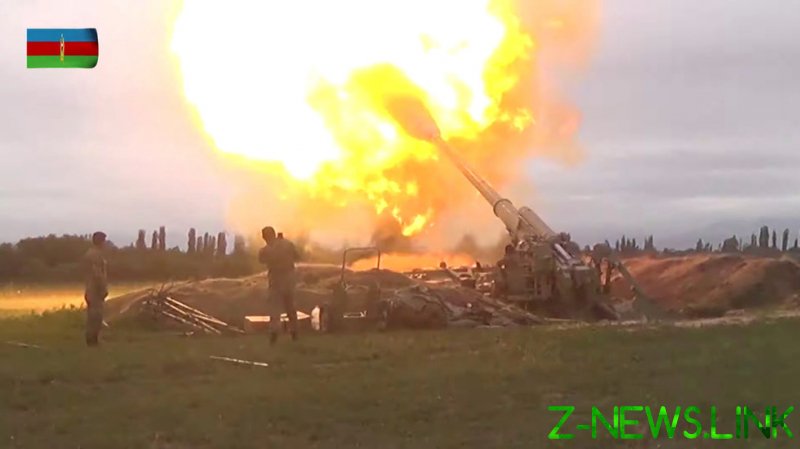 Azerbaijani troops and forces from Nagorno-Karabakh have been trading artillery and rocket fire, with the population of much of Karabakh told to seek shelter. Meanwhile, Armenia has declared a general mobilization and barred men between the ages of 18 and 55 from leaving the country, except with the approval of military authorities.

The most intense attacks took place in the Aras river valley, near the border with Iran, and the Matagis-Talish front in the northeast of the region, according to Armenian Defense Ministry spokesman Artsrun Hovhannisyan. He claimed that the Azeri side has lost 22 tanks and a dozen other vehicles, along with 370 dead and many wounded.

Artur Sargsyan, deputy commander of the Nagorno-Karabakh military, said their own losses so far have amounted to 84 dead and more than 200 wounded. Both figures should be understood in the context of an ongoing information war run by the belligerents.

Vagram Pogosyan, spokesman for the president of the self-declared Artsakh Republic – the ethnic Armenian de-facto government in the capital Stepanakert – said their forces shot down an Azeri An-2 airplane outside the town of Martuni on Monday. This is in addition to some three dozen drones, including ones provided by Turkey, that the Armenian forces claim to  have shot down over the past 48 hours.

Baku has denied the reports, saying only that two civilians were killed on Monday, in addition to five on Sunday, and 30 were injured. There was no official information on military casualties. Reports concerning the downed airplane were rejected as “not corresponding to reality.”

Azeri forces have taken several strategically important locations near the village of Talish in Nagorno-Karabakh, Colonel Anar Eyvazov, spokesman for the Defense Ministry in Baku, said in a statement. He was also quoted by the Interfax news agency as saying that Lernik Vardanyan, an Armenian airborne commander, was killed near Talish. Armenia has denied this and labelled it “disinformation.”

In a video conference on Monday, Azeri President Ilham Aliyev told UN General Secretary Antonio Guterres that the question of Nagorno-Karabakh should be resolved in line with UN Security Council resolutions guaranteeing the territorial integrity of Azerbaijan, and called for the urgent withdrawal of Armenian troops from “occupied territories.”

The current Azeri offensive is backed by Turkey, whose President Recep Tayyip Erdogan has called Armenia “the biggest threat” to peace in the region and called for it to end the “occupation” of Azeri land.

“Recent developments have given all influential regional countries an opportunity to put in place realistic and fair solutions,” he said in Istanbul on Monday.

Unconfirmed reports that Turkish-backed militants from northern Syria have been transported to Azerbaijan to fight the Armenians have been denied by Baku as “complete nonsense.” They amount to “another provocation from the Armenian side,” Khikmet Gadzhiev, an aide to President Aliyev, told Al Jazeera.

Meanwhile, Armenian Prime Minister Nikol Pashinyan vowed his people “won’t retreat a single millimeter from defending our people and our Artsakh.” All Armenians “must unite to defend our history, our homeland, identity, our future and our present,” Pashinyan tweeted on Sunday from Yerevan.

Nagorno-Karabakh is one of several border disputes left over from the collapse of the Soviet Union. An enclave predominantly populated by Armenians, it seceded from Azerbaijan in 1988 and declared itself the Republic of Artsakh following a bitter war in 1992-94.