Home / WORLD / Are we heading for mask apartheid in which only speakers of English are required to cover their faces? 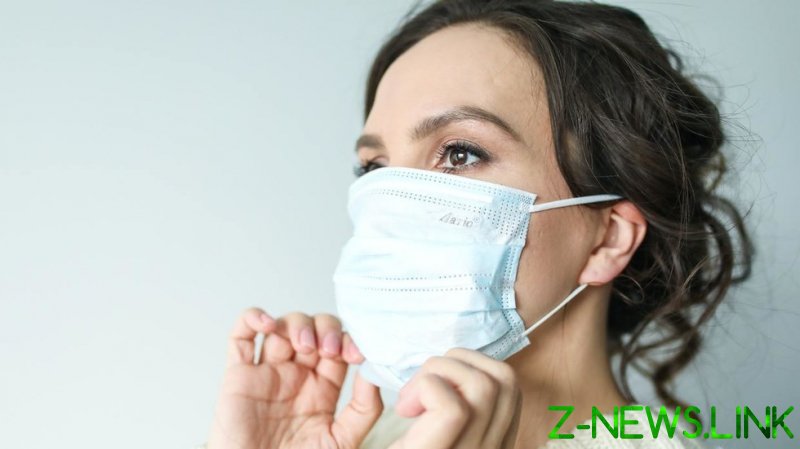 Coinciding with the Biden administration’s massive flip-flop on Covid protocol, which now requires that Americans – regardless of their vaccination status – go back to donning masks in public, Forbes published an article suggesting English speakers are the most pervasive super-spreaders of the coronavirus.

At first, I was tempted to dismiss this story, written by one Alison Escalante, as classic clickbait, another one of those woke-style tirades in the vein of ‘math is white supremacy’ genre. But then it dawned on me that the idea is so shockingly dumb that it actually borders on genius, or rather evil genius. More on that a bit later. First, how is it possible that speaking English may spread more coronavirus than other languages?

The wobbly foundation for that theory is based on a 2003 scientific study that argues that the possible reason Americans traveling to China were infected by the SARS virus was because the English language is riddled with so-called “aspirated consonants” – spit-producing letters such as [p], [t], and [k], which are said to produce a lot of airborne droplets.

Researchers were puzzled as to why the Japanese who traveled to China at the same time (2003) as the Americans recorded zero cases of SARS. (On this point, there is some serious discrepancy in the data. While the study states that 70 Americans had acquired SARS, the US Centers for Disease Control and Prevention reports that, “in the United States, only eight persons were laboratory-confirmed as SARS cases … All of the eight persons with laboratory-confirmed SARS had traveled to areas where SARS-CoV transmission was occurring.”

The researchers presented the following fictional and very unscientific scenario in an effort to explain the dilemma: “A Chinese attendant in a souvenir shop probably speaks to American tourists in English, and to Japanese tourists in Japanese. If the shop assistant is in the early stages of SARS and has no cough … American tourists would, hence, be exposed to the infectious droplets to a greater extent than would Japanese tourists.

To put it in less scientific mumbo-jumbo, in an effort to blurt out those stubborn English consonants, the infected Chinese shop attendant proceeds to firehose his unsuspecting American customer with a verbal germ shower, while leaving the Japanese tourist relatively dry.

Now, with Covid on everybody’s lips, so to speak, it was only a matter of time before this dated study was dusted off and applied to our current emergency. And sure enough, in an effort to determine whether people who speak ‘spitty’ languages have a higher rate of Covid, researchers at Moscow’s RUDN University examined data from 26 countries with more than 1,000 Covid-19 cases as of March 23, 2020.

The authors of the study admit that “no statistical differences were found between the two types of languages.” Meanwhile, the Forbes author was also forced to conclude that “these numbers did not achieve statistical significance, but the observation is interesting nonetheless.” Really? Since when is a study that fails to achieve statistical significance remotely “interesting”? To answer that riddle, we must ask why Forbes paid somebody to produce a story that is predicated on inconclusive science. It wouldn’t have anything to do with building the case for a universal mask mandate, would it?

Before Escalante is forced to admit deep in her story that there actually is no story, she had already exhausted several paragraphs lecturing her readers on the joys of mask wearing and social distancing, while even the simple act of holding a conversation comes off as some kind of revolutionary act.

“The advent of the coronavirus pandemic led to the research finding that not only coughing and sneezing, but simply talking drives aerosolized viruses into the air,” Escalante writes. “That’s one of the biggest reasons for the recommendation that everyone wear a mask and stay six feet apart.”

The concluding paragraph rams home the entire purpose of this uncritical piece of journalism: “No matter what language we speak, wearing masks is a practical way to mitigate this issue. When we talk in masks, we keep our droplets to ourselves.”

Translation: get used to wearing that mask forever, especially if you speak English, because even the act of engaging in casual banter is a germ-filled activity. Never mind that crossing the street, going for a swim, or taking a shower also carry some inherent risks but we still do them.

This isn’t the first time that holding a conversation has been flagged as risky. Earlier this month, Australia’s Chief Health Officer Kerry Chant, after reporting a minor uptick in the number of Covid cases, shockingly advised people to end ‘small talk.’

“So, even if you run into your next-door neighbor in the shopping center … don’t start up a conversation,” Chant said in a news conference. “Now’s the time for minimizing your interactions with others.”

So, on two occasions in as many weeks, the vital function of communication through speech has come under scrutiny. That’s two times too many.

Now, in addition to wearing a mask, we’re slowly being conditioned to believe that the act of talking is somehow loaded with risk. It increasingly appears that the Covid totalitarians will not rest easy until the majority of mankind is muzzled, silenced, and terrified of deliberation. Speak now, ladies and gentlemen, or forever hold your peace.