Archpriest Smirnov said about the need to sanctify nuclear weapons 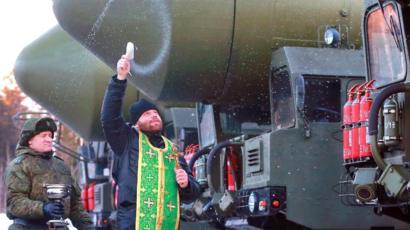 According to the priest, it is thanks to this “wonderful invention” Russia still exists

Moscow. May 8. INTERFAX.RU – head of the Patriarchal Commission for family Affairs Archpriest Dimitry Smirnov stressed that the correct practice of the consecration of the nuclear weapons of the Russian Orthodox Church.

“We dedicate all the items used by the man: and the house, and even clothing and cars. A nuclear weapons – it’s all such a wonderful invention. Thanks to this, Russia still exists,” said the priest in an interview to the newspaper “Tokyo Shimbun”.

He argued that immediately after the second world war, the Prime Minister urged the US President to throw these bombs like Hiroshima and Nagasaki, on 27 cities, the largest in Russia, “that it was not at all.” “And since we managed to make an atomic bomb, they now can’t do anything,” – said father Dimitry, who in 2001-2013 was the head of the Synodal Department for interaction with armed forces.

He admitted that when he sanctified the arms, felt like doing something great. “Though we dedicate a nuclear weapon, but a weapon of peace: we, unlike America, will never use or want to use. It is a tool of intimidation by those who want to destroy what they are now, especially in the twenty-first century, openly say,” said the priest.

According to him, this weapon takes a lot of money, and the Russians have poorer: “But we live and build a state that we want, and not what they want to us.”

“We just thank God that he blessed our scientists to create under very difficult conditions this is a great weapon, so consecrate (missiles – if) as our defenders,” – said Archpriest.

In early February, the Russian Orthodox Church has submitted for public discussion the project of the document where it was proposed to abandon the consecration of certain types of weapons, including nuclear. Collect feedback on the document will run until 1 June. Almost immediately in the bowels of the Russian Orthodox Church, a discussion on this issue. So, the first Deputy Chairman of the Synodal Department for Church and society and the media Alexander Shchipkov expressed disagreement with plans to ban the consecration of certain types of weapons.

“The weapon is consecrated then, that it served a just and noble goals, the same applies to any forced use of force. The subject of the discussion can be objective carrying and use of weapons, and not just in his sanctification (…) Kills not the weapon itself, and the people using it, so it is absurd to assess a weapon upon his “morality,” wrote Tweaks in an article published on website “Interfax-Religion”.