Home / WORLD / Apple ordered to let customers pay OUTSIDE App Store in big win for Epic Games, but Fortnite maker may have to cough up huge sum

Apple ordered to let customers pay OUTSIDE App Store in big win for Epic Games, but Fortnite maker may have to cough up huge sum 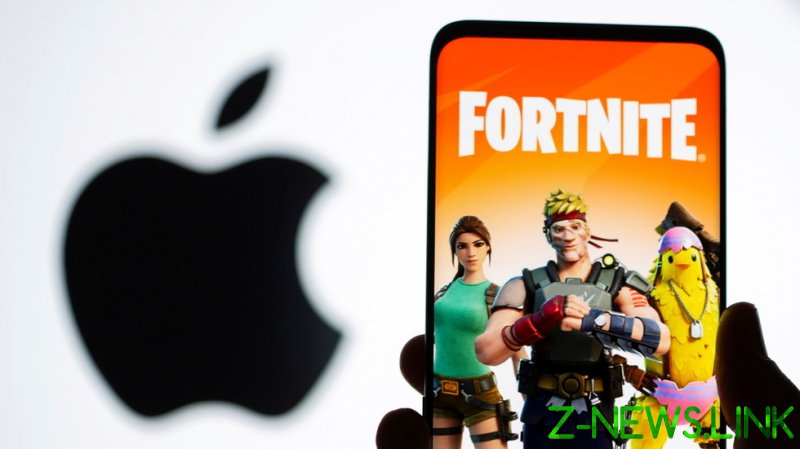 US District Judge Yvonne Gonzalez Rogers issued an injunction on Friday forcing Apple to release its death grip on fees charged on users’ app purchases, granting a partial victory to plaintiff Epic Games even while ordering the software company to pay damages to Apple for breaching its contract.

Epic, makers of blockbuster game Fortnite, will be allowed to inform users of alternate ways to pay for in-app purchases, relieving users of Apple’s 30% commission fees, and other developers will be permitted to do the same, directing their users to competing payment systems.

However, despite Epic’s partial win, Gonzalez-Rogers ruled that Epic had violated its contract with Apple, ordering the company to cough up 30% of the $12 million the company had received from iOS users between August and October 2020, in addition to 30% of its subsequent revenues. The company plans to appeal the verdict.

Fortnite boasts 400 million users, and Epic’s battle with the App Store has been closely watched as part of the ongoing struggle between Big Tech monopolies and the governments who let them become too big to regulate. While the ruling represents a decidedly mixed victory for both sides, the injunction could represent a costly incursion on the App Store’s profitability, and any decision against the trillion-dollar company potentially highlights a weakness to be used in any of the many antitrust suits waiting in the wings.

Epic sued Apple in August 2020 after its app was deplatformed from the App store due to the payment workaround it had attempted to set up, which deployed an Epic-specific app store that allowed players to make in-game purchases without Apple taking a cut. Denouncing the megacorporation’s vengeance as an “illegal restraint” on competition, Epic filed suits against the company in the UK, Australia, and EU as well as in the US; it has also sued Google parent company Alphabet for similarly controlling behavior regarding its Play Store.

While Epic seemingly won a victory in South Korea last week, with that country’s National Assembly banning Apple and Google from forcing their online payment systems on users, Apple has as of Friday refused to reinstate Fortnite to its South Korean app store. The Telecommunications Business Act liberates users to choose which payment provider they want to use and allows the developer to receive money directly from the user, should they so desire; it is expected to take effect in the next few days. However, Apple told AFP that it will not allow Epic Games to relist its titles in South Korea until it agrees to “play by the same rules as everyone else,” citing the company’s admitted breach of contract.

A bipartisan group of US lawmakers recently picked up Epic’s cause, submitting legislation to Congress last month that would prevent Apple and Google from forcing developers to sell their products exclusively over their own platforms. The Open Markets Act would also inform customers if products were available elsewhere for cheaper, notify them of alternative ways to install applications on their devices that didn’t involve either app store, and prohibit “punitive action” against developers who declined to stick to the commission-based model.

Apple and Google, however, have both argued that the commission fees charged to developers are vital to keeping many apps – and the operating systems themselves – free, warning that, should such moneymaking opportunities be cut off, the cost might be passed on to customers.