Apple is again the leader in the market of wearable devices 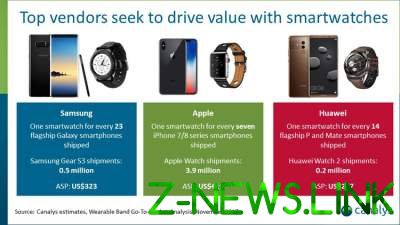 The company Canalys estimated the balance of power in the global wearable devices market at the end of the third quarter of this year.

Canalys data take into account the procurement of such gadgets like smart watches and various fitness trackers. So, it is estimated that in the period July to September inclusive around the world was sold about 17.3 million wearable devices: this is approximately 2% less compared with the year-ago result.

The leader for the quarter was Apple: for three months, “Apple” Empire has shipped 3.9 million hours of Watch. Thus, the company’s share was 23 %. It is estimated that approximately 800 thousand delivered in the quarter Apple Watch supported the work in cellular networks.

In second place is Xiaomi with 3.6 million sold wearable gadgets: the share of this company is 21 %. Closes the top three Fitbit with 3.5 million shipped devices and 20 % of the world market.

The fourth line of a rating of leading manufacturers is Huawei: the company sold 1.0 million devices, which corresponds to 6 % of the market. Followed by Samsung with 0.9 million set of gadgets and a share of 5 %. 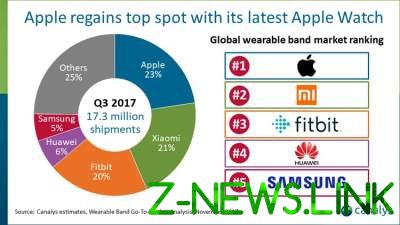