Home / WORLD / ‘Answer to your evilness’: President promises to ‘cut both hands’ of Iran’s enemies with 60% uranium enrichment plan 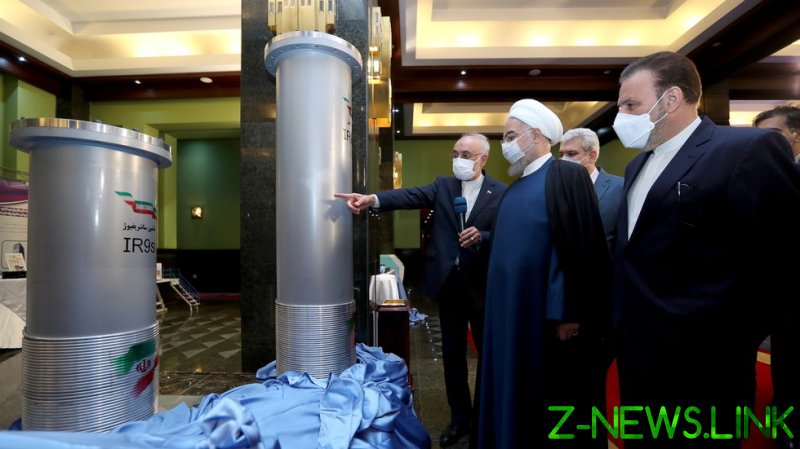 President Hassan Rouhani explained the reasons behind the decision to ramp up uranium enrichment as he spoke during a cabinet session on Wednesday.

The president linked the weekend incident at Natanz to the ongoing talks in Vienna over the comatose 2015 nuclear deal, known as the Joint Comprehensive Plan of Action (JCPOA).

“You wanted to make our hands empty during the talks but our hands are full,” Rouhani stated.

Iran’s nuclear enrichment facility in Natanz was targeted by a suspected act of sabotage on Sunday, when it suffered a power outage. Tehran blamed Israel for the attack, promising to take revenge. Tel Aviv, however, has not commented on the incident.

“If the Zionists take action against us, we will respond. They got the first response. If you make a problem for IR1 we will launch IR6 to realize that you cannot stop us from this technology,” Rouhani said, calling the incident an act of “nuclear terrorism.”

In the aftermath of the incident, Tehran announced its decision to enrich uranium to its highest level ever. The move will involve the installation of around 1,000 additional centrifuges, including the advanced IR-6 model. New centrifuges will replace those damaged during the Natanz incident, as well as providing a major boost to the enrichment process.

The Iranian president also reiterated that the fate of the JCPOA is in the hands of Washington, as only the lifting of US sanctions in full will make the country comply with the landmark agreement again.

The JCPOA effectively crumbled after former President Donald Trump withdrew the US from the agreement in 2018, as he accused Tehran of violating the ‘spirit’ of the deal. The US then re-imposed previous sanctions and rolled out numerous new sanctions against Iran, which, in response, gradually suspended its obligations under the JCPOA, greatly expanding its nuclear activities in recent months.