The announcement of the smartphone HTC U19e, which previously confirmed the rumors that went in the near future HTC will release a full-fledged flagships. This mobile phone is designed primarily for fans of the brand, if they still have any, because it is even more expensive Chinese high-end devices. 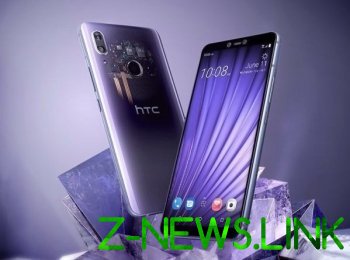 In Taiwan for the HTC U19e asking for 30 000 rubles, i.e. the price in Russia, which has yet to be announced, will be even higher. The cost of the phone contains four cameras – two on the back (12+20 MP) and two in the front (24+2 MP), so in theory the phone can do high-quality selfe. HTC U19e is based on the Qualcomm 710 with eight cores and 6 GB of RAM, and the capacity of its built-in hard drive is 128 gigabytes.

Also available screen Full HD+ IPS exactly 6 inches, in which is embedded a fingerprint scanner, plus there is a bonus in the form of the scanner of the iris. The smartphone also includes IOS and Android 9 out of the box and a good battery 3930 mAh battery with support for fast charging. Global sales of HTC U19e will start on 12 June 2019.