Home / Travel / An American wandering the world with his plush fish

An American wandering the world with his plush fish 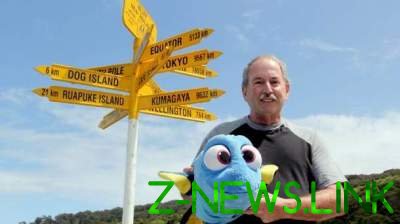 With this toy the man feels comfortable during his travels abroad.

Tom Chapman from USA travelled all over New Zealand with a toy fish. According to the American toy helps him find common ground with others.

The story of 62-year-old Californian, he had been in this country more than 60 times and have toured its length and breadth. The first time Tom came in 1979 in the composition of the heavy metal band. But this time his journey is special: the American arrived with his toy – a plush fish Dory from the animated film “finding Nemo”.

Prior to that he visited with her all the States but abroad Dori went for the first time.

Once Tom retired, he began traveling with the toy. He has no wife, no children. The course of the trip, Chapman described on his page in Facebook.

According to Tom, the fish helps him to establish contacts with the people he meets in his travels. “She is always happy, friendly to all and very curious,” describes his fellow traveler Tom. He bought plush Dory to make fun of a friend, who’s always forgotten, like a cartoon character. But then, says the traveler, “the toy began to live my life.”

Journey through New Zealand lasted four weeks, during which time Tom and his Teddy companion, traveled all over the country from the southernmost point of New Zealand – bluff to the North – Cape Reinga and back.