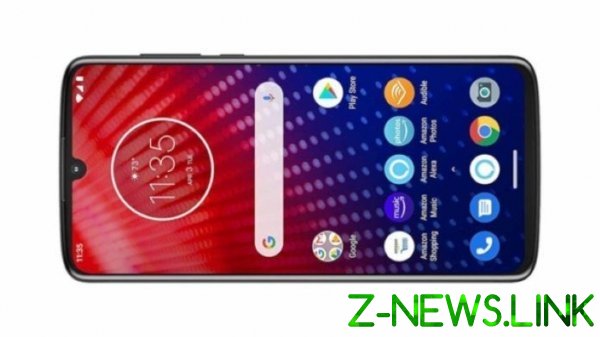 About two weeks ago, Motorola has released the long-awaited model of its smartphone called Moto One Vision – this smartphone has some really interesting features and a very attractive price. But some time ago careful users noticed that the online marketplace Amazon started quiet subsequent sales of the new smartphone flagship from Motorola called Moto Z4 – and this quiet launch is the point at which the manufacturer was quick to give a statement and Amazon shortly thereafter completely stopped selling the device. However, that didn’t help keep the secret.

Thus, we became aware of the fact that the new model Moto Z4 to a greater extent is a strong middle peasants in their characteristics, performance, and price model can offer users a 6.4 inch display with a resolution of 2340×1080 pixels, RAM 4 GB and internal memory of 128 GB, and also quite interesting Qualcomm Snapdragon processor 675.

That is due to the choice of the CPU chip, the model has received such widespread user discussions, since the processor is not particularly expensive, but very productive, which gives hope for a lower price. By the way, despite the fact that the site Amazon launched the registry with the sale of the smartphone, the specific price was not marked – but we can assume that it will be less than $ 500 for the whole smartphone. Moreover, given two single camera to 25 and 12 MP respectively, which do not possess any particularly sophisticated technology.

It is worth noting the fact that the Moto Z4 provides some other surprises and opportunities – however, it is necessary to wait for some time. In addition, Motorola offers its users a really interesting approach to buying, making its new device the most balanced for its price and specifications.