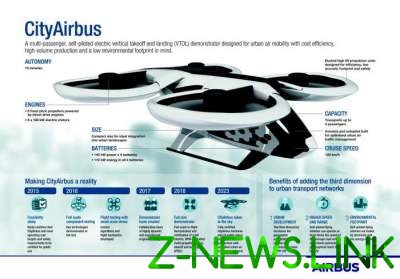 The company seriously intends to capture the market flying taxi.

Airbus announced that it was developing a concept of a flying taxi may make its first flight before the end of 2018.

This was reported by the press service of the company.

It is noted that we have recently completed the first full-scale test of the engine air taxi.

The first test will be unmanned. However, by the time of the start of operation in cities, the vehicle will be piloted by people. In the future we plan to fully switch to work offline. Commercial maintenance air taxi scheduled around 2023.

For the first time the concept of unmanned flying taxi was announced by Airbus in August 2016.

The idea of driverless electric vehicle will have four rotors, will be able to perform vertical takeoff and landing, and also allow you to carry up to four passengers.

The use of four screws will be able to reduce the size of the air taxis and the noise level. The distribution of the cost of the flight for four passengers will allow to make flights at a price that will sopostavimy with the cost of the trip in a regular taxi.