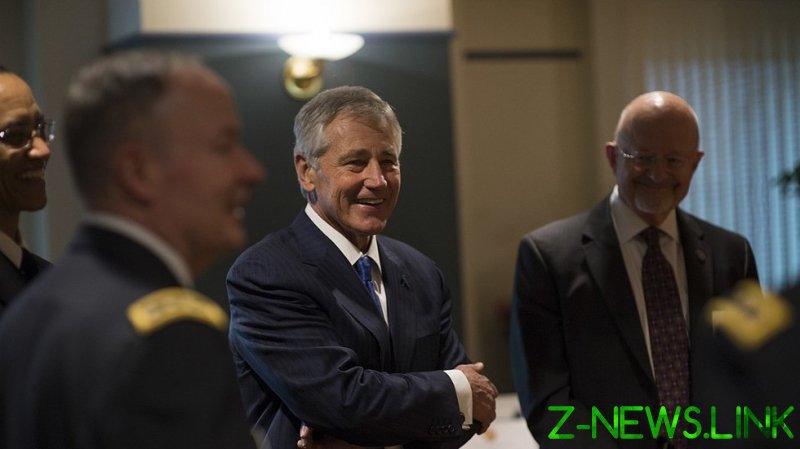 The latest Never Trumper assault on Orange Man is a letter by 70 former “security officials” who said, you guessed it, he’s bad. The letter signers identify as Republicans so the story is played up to suggest that even folks in Trump’s own party have come to realize how bad he is.

It’s sort of like the strategy deployed at the Democratic National Convention, bringing out a parade of has-been and never-were Republicans to show they are “putting country over party” by endorsing the presidential candidate whose party hates the country.

The whole notion that Washington’s establishment power brokers have meaningfully different stances on the issues that matter most is a farce – all part of the left-right theater that keeps voters stupefied and divided. That’s why it’s easy for the late John McCain wing of the Republican Party to be on the same anti-Trump page as former President Barack Obama, former Secretary of State Hillary Clinton and Democrat presidential nominee Joe Biden. McCain even professed his admiration for Biden, two years after his death, as the senator’s wife narrated a video for the DNC about the close friendship the two men had.

The 70 letter signers are firmly on that page, too. They gave a host of reasons as to why Trump is “unfit to lead,” including his “corrupt behavior,” spreading of “misinformation,” and vilification of immigrants. But the real doozy, the one that makes Trump absolutely unacceptable to those who think they control US policy, is that the president has “imperiled America’s security.”

The signers – including the likes of former Secretary of Defense Chuck Hagel, former CIA director General Michael Hayden, former national intelligence director John Negroponte and former CIA and FBI director William Webster – complained that Trump had fired or replaced people in critical national security positions, many because they refused to cover for his misdeeds or demonstrate sufficient loyalty to the president.

What seems to be missing in the indictments is an appreciation for democracy. As members of the permanent bureaucracy, security officials don’t have to be elected. That they supposedly work to carry out the policy initiatives of those who are elected is more of a theoretical inconvenience than a reality. The War State has its own laws for US foreign policy, and no figurehead gets to change them.

Those laws include: Russia is the bogeyman; overseas regime-change adventures make us safer; and senseless wars are good and profitable, especially when they drag on forever. If the rubes in flyover country are too stupid to understand all that, then we have figureheads to explain why the next round of shock and awe is necessary.

That’s not democracy. Trump is trying to implement the policy objectives that he promised on the campaign trail, and if voting means anything, he deserves security officials around him who will loyally carry out his orders. He didn’t get that, so yes, people were fired and replaced, sometimes on Twitter.

What’s most preposterous is the notion that getting rid of these recalcitrant experts and going against the War State’s foreign policy laws made Americans less safe. Unlike the Obama-Biden administration, which dropped more than 26,000 bombs on seven different countries in 2016 alone, the Trump administration hasn’t gotten us into any new wars.

Trump worked, to some degree, in cooperation with Russia to destroy ISIS, a terrorist scourge that was birthed during the Obama-Biden years. He held peace talks with dictator Kim Jong-un, halting nuclear weapons tests by North Korea, and he’s working toward finally ending the war in Afghanistan. He pulled troops out of Syria last year, a decision that policy “experts” warned would lead to disaster. Trump reminded reporters this week that the experts were wrong: “I brought our soldiers back home. I got them out, and guess what? Nothing’s happened. They’ve been fighting like they have been for 1,000 years, OK? Nothing’s happened.”

Contrast Trump’s national-security record with that of the security officials lined up against him. These are a lot of the same people who helped give us disastrous wars and senseless military interventions all over the Middle East and Africa. They helped give us the migrant crisis. They tried to give us a regime-change war in Iran and likely would have succeeded if “Madame President” Clinton had really won the 2016 election. They gave us mass surveillance of Americans and lied about it. They wasted our nation’s blood and treasure from Benghazi to Baghdad and caused staggering human suffering in the countries we supposedly fought to liberate.

It’s no wonder they have no credibility left. As Claremont Institute senior fellow Jeremy Carl wrote on Twitter, the letter attacking Trump was just another reason to vote for the incumbent, considering the source. It’s no wonder that from the time this week’s DNC began and when it ended – with all of the party’s stars and their Republican friends ripping Trump night after night – the president’s approval rating rose to 51 percent from 47 percent, according to Rasmussen Reports.

Most Americans don’t buy what the establishment is trying to sell. It’s why Trump won the first time and we had to have the Russia hoax to prevent having a better relationship with Moscow. The security officials may need, in the words of disgraced former FBI agent Peter Strzok, an “insurance policy” in the wings to make sure that the War State’s laws continue to be followed.