Home / Incident / A drunken accident in Transcarpathia: in a ditch came off the truck with beer

A drunken accident in Transcarpathia: in a ditch came off the truck with beer 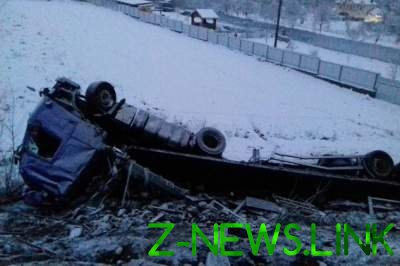 The truck driver and his partner were intoxicated.

A traffic accident occurred near the village Golubino of Svalyava district on the highway Kyiv-Chop. The truck, loaded with beer, flew off the road into a ditch and overturned. This became known from the message of Department of communication of the police of the Transcarpathian region.

To the police about the incident reported, the other driver. Police arrived at the scene and saw the truck lying in a ditch wheels up. The driver and his partner had to get out of the cockpit because it was locked.

“It turned out that the truck was carrying beer from Kiev. Behind the wheel was a resident of Mukachevo district, the cabin was his partner. Both men were in a condition of alcoholic intoxication: one of Drager has found 1.6, the second of 1.34 ppm of alcohol”, —said the police.