Home / WORLD / ‘A disgrace to all artists’ or not enough? Hollywood spars over woke diversity quota for future Oscar ‘Best Picture’ award

‘A disgrace to all artists’ or not enough? Hollywood spars over woke diversity quota for future Oscar ‘Best Picture’ award 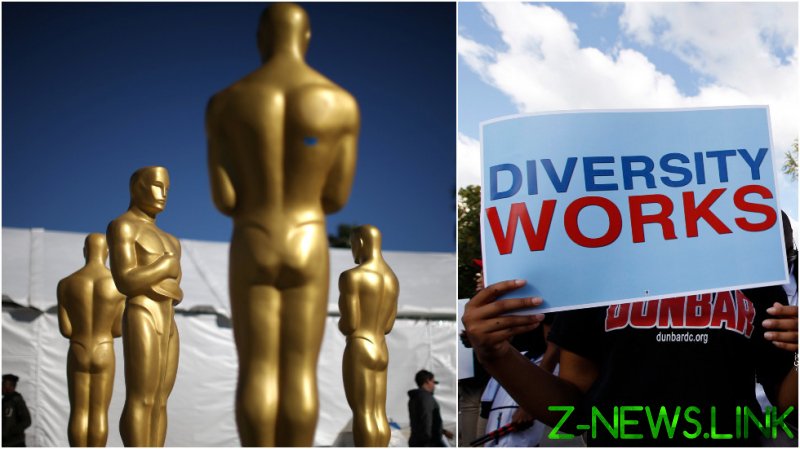 The new standards were handed down on Tuesday, establishing rules for the 2024 Oscars which were designed to “better reflect the diversity of the movie-going audience,” the Academy said in a statement, though noted they would apply only the Best Picture category.

“The aperture must widen to reflect our diverse global population in both the creation of motion pictures and in the audiences who connect with them. The Academy is committed to playing a vital role in helping make this a reality,” said Academy President David Rubin and Academy CEO Dawn Hudson, adding that the rules “will be a catalyst for long-lasting, essential change in our industry.”

The standards require that filmmakers hire actors and other workers from “underrepresented groups,” which pertains to race, ethnicity, gender and sexual orientation. Beginning in 2024, to qualify for the highly coveted Best Picture award, films will have to meet two of four sets of detailed criteria laid out by the Academy. While films will not be held to the standards for another four years, in the meantime all submissions will have to include an “inclusion standards form” regardless.

The decision has set off fierce dispute online, among both average movie-goers as well as industry insiders, including writers, actors, directors and producers.

“This is a disgrace to artists everywhere…can you imagine telling Picasso what had to be in his f**king paintings[?]” actress Kirstie Alley tweeted. “You people have lost your minds. Control artists, control individual thought… OSCAR ORWELL.”

Even some who supported the idea in concept asked whether the rules would merely encourage more “tokens and stereotypes on screen,” fearing it might become a lazy quota system rather than a way to meaningfully propel diversity and inclusion.

The new standards found plenty of support, however, including from veteran film producer Axel Kuschevatzky, who boasts more than 80 feature credits under his belt.

Others brought a wholly different type of criticism, with comedy writer Allison Kilkenny arguing the rules didn’t go nearly far enough and set a “laughably low bar” for diversity in film, while another online detractor dubbed them “ridiculous pandering with no real change.”

The Academy’s new inclusion rules come as progressive activists both in and outside Hollywood seek to excise all potentially ‘offensive’ material from television and cinema, even prompting HBO to remove the 1939 classic ‘Gone with the Wind’ from its streaming service, as the 81-year-old film – shockingly – failed to meet 2020’s standards for racial justice.