29 November – day of the Holy Apostle and Evangelist Matthew 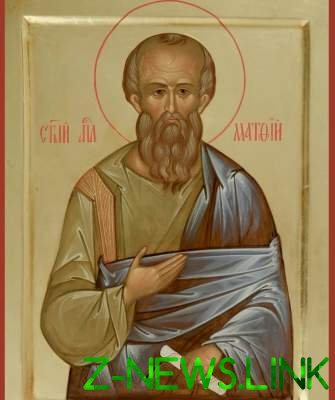 The Holy Apostle Matthew walked with the gospel Syria, media, Persia, Parthia, having finished their labors preaching a Martyr’s death in Ethiopia.

St. Matthew was an Apostle among the twelve closest to the Lord’s disciples. Before conversion to Christ Matthew served as a publican, i.e. a tax collector for Rome. Hearing the voice of Jesus Christ: “follow Me” (Matt. 9. 9), he left his post and followed the Saviour.

Having received the gracious gifts of the Holy spirit, the Apostle Matthew first preached in Palestine. Before leaving to preach in distant countries at the request of the Jews who remained in Jerusalem, the Apostle wrote the gospel. Among the books of the New Testament, the gospel of Matthew comes first.

The book is written in the Hebrew language. Words and deeds of the Savior Matthew presents under the three sides of Christ’s service: as Prophet and Lawgiver, the King over the realm of the invisible and visible and the high Priest offering a Sacrifice for the sins of all people.

The Holy Apostle Matthew walked with the gospel Syria, media, Persia, Parthia, having finished their labors preaching a Martyr’s death in Ethiopia. This country was inhabited by tribes of cannibals with rough customs and beliefs.

The Holy Apostle Matthew in his preaching drew here several idol-worshippers to faith in Christ, founded the Church and built a temple in the city Mirmeky where to put the Bishop his companion by the name of Plato. When the Apostle earnestly prayed to God about the treatment of Ethiopians, during the time of prayer the Lord Himself appeared to him in the image of the young man, gave the rod, and commanded to put it at the door of the temple. The Lord said that this rod will grow the tree will bear fruit, and from its roots would flow a stream of water. After the Ethiopians will wash in that water and try the fruit from this tree, they will change their wild nature will be kind and gentle. When the Apostle carried the staff towards the Church, they met on the way the wife and son of the ruler of this country of Fulvian, who had an unclean spirit.

See also:  Ukrainian singer spoke about the prohibition of entry of artists from Russia to Ukraine

The Holy Apostle in the name of Jesus Christ healed them. This miracle converted to the Lord many pagans. But the Emperor did not want his subjects to become Christians and cease to worship the pagan gods. He accused the Apostle of sorcery and gave orders to execute him.

St. Matthew laid face down, heaped up brushwood and ignited it. When the bonfire flared up, everyone then saw that the fire did not harm St. Matthew. Then Fulvian ordered to add wood to the fire, doused it with pitch and put around twelve idols. But the flames melted the idols and burned Fulvian.

The frightened Ethiopian turned to the Saint with an entreaty for mercy, and the prayer of the Apostle the flames calmed down. The body of the Holy Apostle remained unharmed, and he departed to the Lord about 60 years after Christmas. The ruler Fulvian regretted the incident, but his doubts did not leave. He ordered to put the body of Saint Matthew into an iron coffin and throw him in the sea.

In this Fulvian said that if God Matveev will preserve the body of the Apostle in the water as he preserved him in the fire, we should worship the one True God. On the same night to Bishop Platon in a dream appeared to the Apostle Matthew, and told him to go with clergy to the shore of the sea and find his body there.

Came ashore and Fulvian and his retinue. The outside wave coffin was honorably transferred to a Church built by the Apostle. Then Fulvian begged in Matthew of the petition, after which Bishop Platon baptized him with the name Matthew. Fulvian afterwards received the bishopric and continued educating his people.