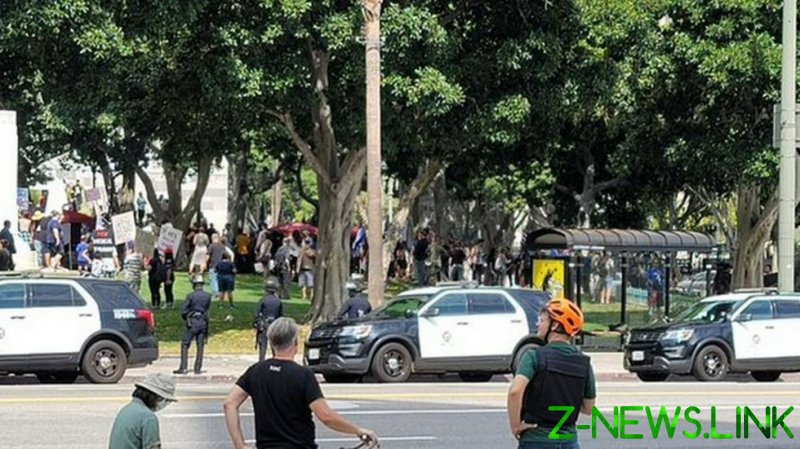 Dozens of people waving American flags and carrying anti-vaccine posters turned out at a protest against the measures aimed at mandating Covid-19 vaccinations on Saturday afternoon. While no such mandate currently exists, the Los Angeles City Council voted on Wednesday for city attorneys to start working on a law that could bar residents who refuse to take at least one dose of the Covid-19 vaccine from visiting restaurants, gyms, movie theaters and even from shopping in person.

The rally, however, soon descended into violence after brawls broke out between the rival parties.

At one point, a man was stabbed in the chest and collapsed on the street. Footage from the scene shows paramedics using a stretcher to load up the victim into an ambulance. No arrests have been made so far.

The man was taken to a hospital in a serious condition, according to the Los Angeles Police Department. Whether the stabbing victim was part of the ‘Medical Freedom’ rally is so far unclear. An American flag can be seen on a close-up shot of what is purported to be the victim’s cap – which some commentators interpreted as a sign that he was with the anti-vaccine demonstrators.

Citing accounts provided by the witnesses, police said that his attacker was clad in black, The Los Angeles Daily News reported, without providing additinoal details.

While neither the victim’s identity, nor that of the attacker have been revealed the police drew outrage from liberal commentators after they identified the counter-protesters as “Antifa,” a loose coalition of left-wing activists that sometimes employ violence, and members of the “Medical Freedom” rally as “people gathered for the permitted event” in a statement about the stabbing incident.