Home / Video news / Zeman showed what weapon he will “deal” with journalists. Video

Zeman showed what weapon he will “deal” with journalists. Video 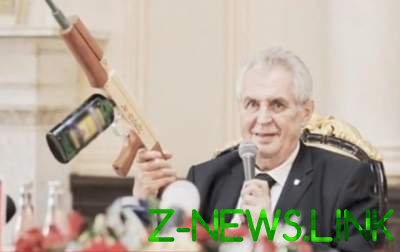 The Czech President was again the center of a scandal at a press conference.

Controversial Czech President Milos Zeman during a press conference showed the weapon to target journalists. It is reported by TSN.

The Czech President was again at the epicenter of the scandal: the press conference he brought in a replica of the Kalashnikov assault rifle with the inscription “For journalists”.

See also:  The explosion of a car with the police in the Donbas believe a terrorist attack. Video

Instead of ammunition cartridges in the machine, inserted a bottle of Czech liqueur. Human rights defenders and journalists did not appreciate the joke, saw it as a veiled threat.

Note that in the Czech press doesn’t like the President. The head of state at the time called journalists manure and hyenas.