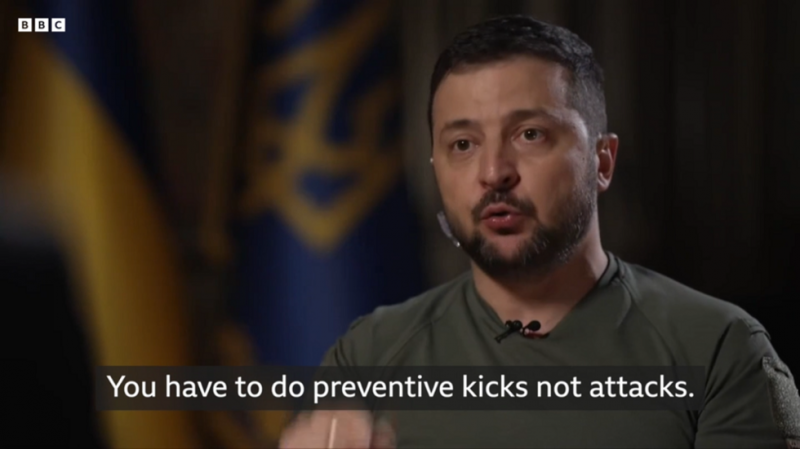 Ukrainian President Vladimir Zelensky insisted that his remarks about preemptive NATO nuclear strikes on Russia had been mistranslated. He really meant “preventive kicks,” he told the BBC in an interview that aired on Friday, with the British state broadcaster interpreting this as referring to sanctions.

“I said you have to do preventive kicks, not attacks,” Zelensky told BBC’s John Simpson.

Quoting him in the text accompanying the video, the BBC inserted the interpretation that this was “referring to sanctions.” This echoed the explanation offered by Zelensky’s spokesman Sergey Nikoforov, after the president’s initial remarks to the Lowy Institute in Australia went public and caused widespread outrage.

“What should NATO do? Eliminate the possibility of Russia using nuclear weapons,” Zelensky said, according to the translation of his remarks from Ukrainian. “I once again appeal to the international community, as it was before February 24: preemptive strikes so that they know what will happen to them if they use it, and not the other way around.”

The phrase he used literally translates as “preemptive strikes,” with the word “udary” in Ukrainian meaning both “strikes” and “kicks.” How exactly the word could translate as “sanctions,” neither Nikoforov nor Zelensky offered to explain.

“After that translation, they [the Russians] did their way, how it’s useful for them, and began to retranslate it in other directions,” Zelensky told the BBC, according to the article. He also claimed the Kremlin was preparing the Russian public for the use of atomic weapons.

“They begin to prepare their society. That’s very dangerous. They are not ready to do it, to use it. But they begin to communicate. They don’t know whether they’ll use or not use it. I think it’s dangerous to even speak about it,” he told Simpson, in English.

The only Russian official to so much as suggest the use of nuclear weapons has been the head of Chechnya Ramzan Kadyrov. He was gently reprimanded for it by Kremlin spokesman Dmitry Peskov, who said that while regional heads are free to express their opinions, they cannot give free rein to their emotions, “even in difficult times.”

Moscow has repeatedly and publicly committed to the joint position of the nuclear “Big Five” that an atomic war should never be fought. Russian nuclear doctrine allows the use of atomic weapons only in self-defense from an attack with weapons of mass destruction, or when the country’s survival is at stake due to a conventional threat.