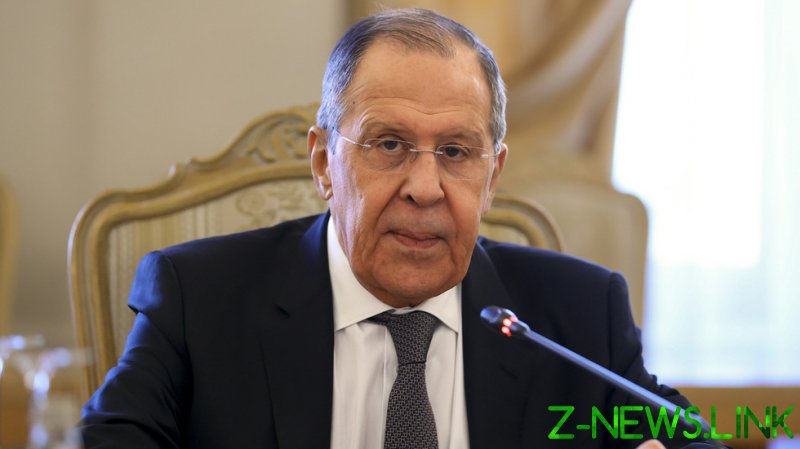 Russian Foreign Minister Sergey Lavrov discussed Russia’s standoff with the US and other Western nations in an interview with RT on Friday, and outlined the direction in which Moscow is moving.

He said the West had encouraged Ukraine to turn into an “anti-Russia,” and now its leader is trying to goad US President Joe Biden into going to war for Kiev.

Lavrov argued that Moscow is being subjected to “info-terrorism” by its opponents, who have dropped all pretence of adhering to the values they preach. Tensions will calm down, but Russia will no longer be under any illusion that it would be welcomed as an equal in the West, the foreign minister added.

Here are some of the highlights from the interview

‘Just months ago, Ukraine’s Zelensky told ethnic Russians to go to Russia’
Western officials want to memory-hole the fact that the Ukraine crisis started with an armed coup in Kiev, Lavrov said. The post-coup authorities implemented discriminatory policies consistent with Russophobic views of radical Ukrainian nationalists, who were the fighting forces behind the Maidan protest, he added, and President Volodymyr Zelensky endorsed this stance too.
Lavrov cited remarks made by Zelensky in August, in which he told people living in the breakaway region of Donbass to go to Russia if they considered themselves to be Russian. Moscow recognized the two rebel republics as sovereign states days before attacking Ukrainian troops.
The foreign minister argued that it was one of many pieces of evidence suggesting Ukraine was being turned into an “anti-Russia,” as President Vladimir Putin described it in late February. The West encouraged this process, Moscow believes.
Lavrov stressed that Russia had no issue with the Ukrainian people. The goal of the military action is to deny any power to radical nationalists and force Kiev to scrap discriminatory legislation, he said.

Zelensky goading Biden into war
Zelensky has been using his newfound status as a Western media darling to put pressure on the Biden administration to escalate tensions with Russia by establishing a no-fly zone over Ukraine and providing it with advanced weapons. According to Lavrov, Biden is an experienced politician who realizes the dire consequences of such policies.
“But there are much less responsible politicians in the United States, who are being agitated by the Ukrainian lobby and are just driven by Russophobic feelings. Many of them are in Congress,” he said.
Russia considers any weapons supply “fair game” for an attack, Lavrov warned.

US ‘brainwashes’ kids as it wages information war against Russia
The foreign minister commented on the White House’s recent move to brief popular TikTok influencers about how rising gas prices in the US were supposedly Russia’s fault. Lavrov said the US government was apparently trying to “brainwash” kids – the primary audience of the platform – calling this approach “indecent.”
The global news landscape is dominated by Western outlets, Lavrov acknowledged, adding that they have been using their power to attack Russia.
“We know the tricks that have been used by Western countries to manipulate the media. We understood long ago that there was no such thing as independent Western media,” he said.
“It’s a war [against Russia] that involved the methods of informational terrorism, there is doubt about this,” Lavrov said. That was one of the reasons why Putin branded the US-led world order an “empire of lies,” he added.

US biolabs should be scrutinized
The top Russian diplomat reiterated his call for US-funded biolabs located in other nations to be subjected to international scrutiny. Moscow fears that the research performed in these facilities may violate the Biological Weapons Convention. MOre than 300 such biolabs operate around the world, Lavrov claimed, pointing out that many of them are located close to the borders of Russia and China.
“The Americans some years ago decided that it was too dangerous to do [such research] on their own soil. So, they moved all these threatening and dangerous activities to other countries,” he said.
The US says the sites funded by the Pentagon’s Defense Threat Reduction Agency simply monitor potentially dangerous infections. But last week US Under Secretary of State for Political Affairs Victoria Nuland admitted that Washington was helping Ukraine to destroy research materials in the biolabs it hosts to prevent the Russian military from capturing them.
Moscow wants the Convention to be reinforced with a protocol that would implement mandatory compliance verification mechanisms for all member states, including the US. Washington has long opposed such efforts, which Moscow and Beijing find suspicious.

‘We didn’t shut the door, but no illusions remain about the West’
Western hostility towards Russia is long entrenched, and the current escalation leaves Moscow with no illusion that it could have been accepted as an equal after the collapse of the USSR, Lavrov said.
The US has gone to great lengths to demonstrate how the entire world is supposedly denouncing Russia for its attack on Ukraine and supports punishing it, the official said. He claimed that, in some cases, the Americans had threatened officials representing foreign nations in international organizations with personal sanctions to force them to vote against Russia. But the move to rally around the anti-Russian flag is far from universal, he said.
“There are players who would never accept a global village under the American sheriff. China, India, Brazil, Argentina, Mexico. I am sure those countries do not want to be in a position where Uncle Sam orders them to do something and they say ‘Yes, sir,’” he said, adding that the same can be said about Russia.
Moscow remains open to any nation willing to deal with it with mutual respect, including Western nations, Lavrov said.
“We are not closing the door on the West, they are doing so. But when they come back to their senses, and when this door is reopened… we will be going into cooperation with them knowing very well that we cannot be sure that they are reliable,” he explained.