Home / WORLD / ‘You weaken our institution’: Top French cop hits back at 93 ex-officers who signed letter calling for ‘civil war’ to be avoided

‘You weaken our institution’: Top French cop hits back at 93 ex-officers who signed letter calling for ‘civil war’ to be avoided 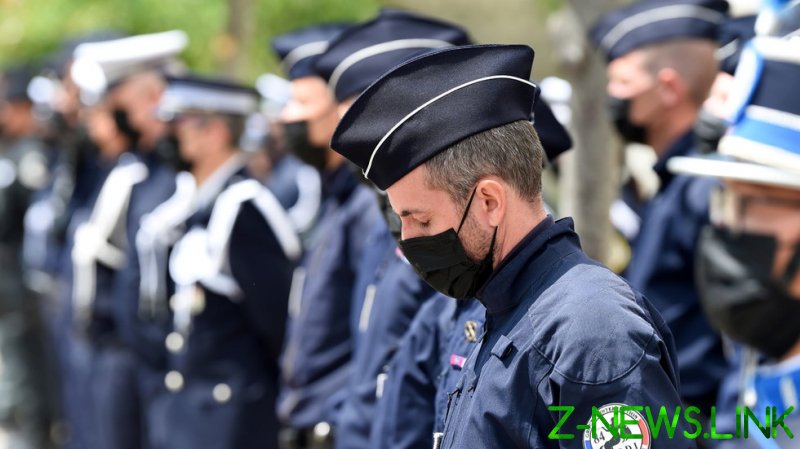 Striking a similar tone to earlier open letters that were signed by retired and active military personnel, a petition signed by 93 former police officers urged President Emmanuel Macron, the government, and lawmakers to “do everything possible to put an end to the extremely serious situation that France is going through in terms of security and public peace.”

France must not fall into chaos. The French police cannot allow that armed forces replace them tomorrow in order to avoid a civil war.

The signatories wrote that attacks on police constitute “the rejection of our republican values, our customs and our model of society.” The letter mentioned the death of Eric Masson, an officer who was killed during a drug raid in the southern city of Avignon this month.

“Open attacks on police stations by the hordes of armed and masked individuals are spreading across our territory with impunity,” the letter said, adding that the country “has fragmented into enclaves.”

The signatories asked to “rearm [the police] materially, morally and legally,” so they can continue performing their duties without “risking their lives on every street corner.”

“It’s time for effective measures to take back our own country and restore the authority of the State wherever it fails,” they wrote.

As of the time of publication, the petition posted on the website mesopinions.com received around 39,000 signatures.

Frederic Veaux, France’s top police official, responded in a letter of his own, which was cited by the French media. Veaux argued that former police officers are still bound by the ‘duty of restraint’ – a law that demands civil servants show “restraint and moderation” when expressing personal opinions in public.

Veaux wrote that, regardless of the motives behind the petition, “your initiative weakens our institution more than it strengthens it.” He argued that the French police force “more than ever needs self-confidence, unity and cohesion within its ranks, without the spirit of partisanship.”

At the same time, Veaux said that the government has made “important steps both in terms of protection of police officers and equipment.”

The exchange came after two similarly-worded open letters were published by the French conservative news magazine Valeurs Actuelles. The first appeal came in April and was signed by 25 retired generals and more than 1,000 former and active-duty soldiers. It spoke about a possible civil war and urged authorities to intervene against the “disintegration” of the country. The letter specifically asked Macron to fight “Islamism and the hordes of the suburbs,” and as well as “masked individuals” that attack police stations.

The second petition was anonymous, with the authors describing themselves as soldiers belonging to the younger generation. They urged that steps be taken to prevent France from becoming “a failed state.” Valeurs Actuelles said that the letter, which was published on May 11, has been read by more than 2.4 million unique users on their website and received 287,578 signatures as of Friday.

The letters attracted a lot of media attention and sparked debate in France. Marine Le Pen, who leads the conservative National Rally party, said she shared the concerns expressed by the soldiers. Government officials and top army brass argued that the tone of the petitions was inappropriate, and that the military should remain neutral in political affairs.

Armed Forces Chief of Staff General Francois Lecointre said that active-duty military personnel should resign if they wish to make such statements in public. He also said that active-duty servicemen who are identified as signatories to the April letter will be court-martialed for breaking the neutrality rule.