Home / WORLD / ‘Yes, we are racists’: Group of Ukrainians filmed marching in Kiev dressed as Ku Klux Klan on Halloween

‘Yes, we are racists’: Group of Ukrainians filmed marching in Kiev dressed as Ku Klux Klan on Halloween 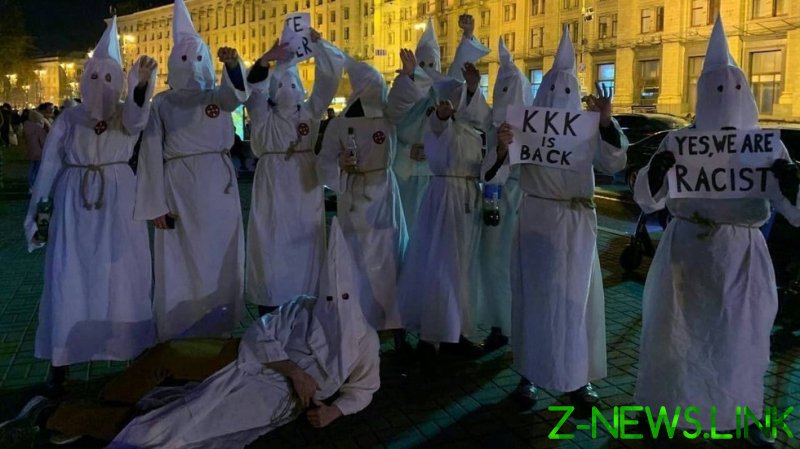 The KKK, which stands for Ku Klux Klan, is an American white supremacist terrorist hate group founded in the 19th century after the country’s Civil War. Its popularity peaked in the 1920s. It has been implicated in murders and lynchings of African Americans. Nowadays, a handful of smaller Klan groups still operate in the US.

However, in Kiev, the gruesome history of the extremist group did not seem to bother this group of Ukrainians who apparently deemed the white costume a suitable Halloween outfit.

In a video filmed on Sunday night, and shared on the Telegram channel of Ukrainian outlet Strana, a group of people was seen wearing the famous gown and headdress, carrying signs reading “Yes, We Are Racists,” “KKK is back,” and “White Power.” They also took photos with two black men sitting on a bench, and made the Nazi salute.

In recent years, Kiev has seen a growth in far-right activity, with nationalists regularly allowed to openly march on the streets in support of Nazis. Last month, on the country’s Defenders and Defendresses Day, thousands of people turned up to march under the flags of the Azov and Right Sector extremist organizations. The group also carried banners with racist slogans, such as ‘White Lives Matter.’

This march came just six months after another procession in celebration of Nazi collaborators. In April, a small group of people from various nationalist groups participated in a commemoration of SS Galicia, a World War II Nazi infantry division made up of Ukrainians. The unit was almost wiped out in the 1944 Battle of Lvov–Sandomierz, and later saw action in Slovakia and Austria. In 1945, it rebranded as the Ukrainian National Army and lasted until the end of the war in May that year.