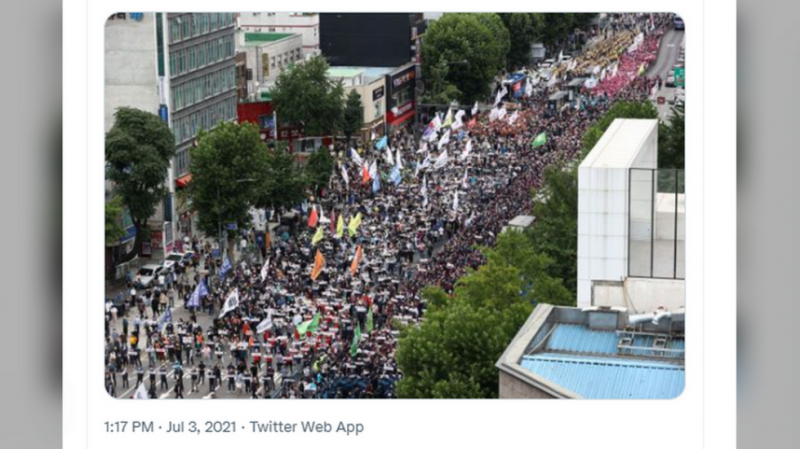 The unions had planned to hold a rally in Yeouido, western Seoul, but they decided to gather at a new location after police attempted to block them from going to Yeouido by erecting barriers.

“We have gathered here to protect the lives and safe employment of workers,” KCTU chief Yang Kyung-soo, said during the rally, which lasted for about two hours, according to the Yonhap news agency.

The union members demanded that job cuts be stopped, the minimum wage be raised, and support be increased for workers affected by the lockdowns.

“Korea has the 9th-largest GDP among OECD member countries, but the lowest minimum wage. They are supporting [large corporations] by sucking the blood of small businesses and workers,” KCTU Vice Chairman Park Hee-eun said. KCTU reported that one person was arrested on the way back from the event.

On Thursday, the Seoul government postponed for at least a week its plan to lift some of the restrictions on outdoor rallies in the capital, due to the continuing rise in infections.

Prime Minister Kim Boo-kyum urged the unions to postpone the rally due to Covid-19 restrictions and threatened the protesters with action if they failed to comply. “No matter how important the rights and freedoms are, one should not threaten the lives and safety of others,” the PM wrote in a statement on social media a day before the event. “The massive rally in the capital … is a dangerous act that can pour fuel on the fire in terms of the coronavirus.”

The unions rejected the PM’s plea. “What is scarier than infection are workplace deaths and dismissals, as well as the world of inequality and discrimination,” KCTU said in a statement to the media.

South Korea’s daily count of Covid-19 cases shot past 800 on Friday, which was the highest amount in nearly six months, according to Reuters. On Saturday, the Korea Disease Control and Prevention Agency reported 748 locally transmitted and 46 imported cases, bringing their total number to 159,342.