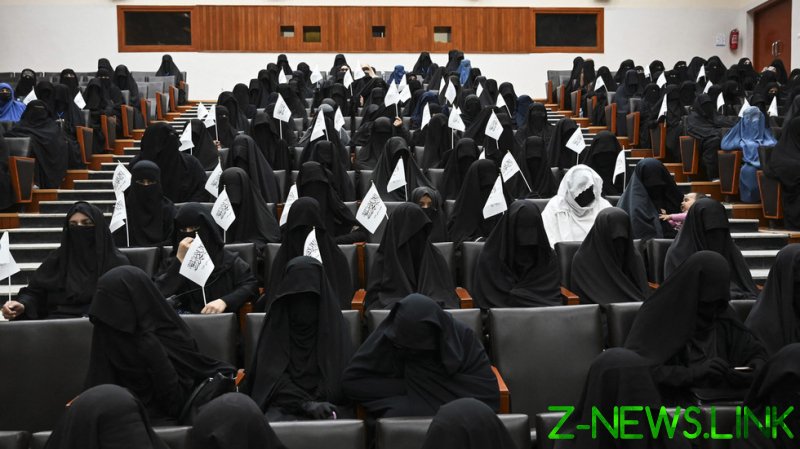 Several dozen women, purportedly female students of Shaheed Rabbani Education University in Kabul, marched down the city streets on Saturday, chanting Allahu Akbar (The God is Greatest) in support for the Taliban rule.

The majority of the participants of a small and orderly procession were clad in head-to-toe black veils and carried placards reading: “We don’t want co-education”, “Our rights safe in Islam” and “Women who left Afghanistan cannot represent us” in reference to those who fled Afghanistan as part of the chaotic US-led evacuation effort after Kabul fell to the Taliban in mid-August.

“We want from the Islamic Emirate to ensure all rights of the women. Access to knowledge, work, and health must be stated in their priority, and they must focus on these issues,” one of the protesters said, as reported by RT’s Ruptly video agency.

Taliban militants, some of which were armed with machine guns and rifles, marched alongside the women apparently to provide security.

The rally followed a meeting in the university that featured about 300 women, AFP reported. Some of them took the floor to denounce the women’s rights protesters, and argued that the US-backed Afghan government of exiled President Ashraf Ghani was “misusing women” and “recruiting women just by their beauty.”

Daud Haqqani, director of foreign relations at the education ministry, insisted that although the rally was authorized by the new Taliban government, it was called for by the female demonstrators themselves.

Reacting to the photos from the event, some online pundits expressed disbelief that women might be satisfied with life under the Taliban, while calling full veils “dehumanizing.”

Others contended that while there might be women that genuinely support the militants and their worldview, their beliefs are “never in a million years” representative of Afghan women as a whole.

Afghan-born former refugee Roh Yakobi used the images to poke fun at the gathered, saying that he is “not sure how many of these people are actually women.”

Assistant Professor of Law at the American University of Afghanistan, Haroun Rahimi, however, fired back at those mocking the women for their appearance, calling liberals “equally intolerant” when it comes to what Afghan women are supposed to look like and think. “It is all about choice. Women’s choice. These women chose this hijab. We need to honor & respect their choice,” he tweeted.

Sentiment at Saturday’s protest was in a striking contrast to that at women’s right marches organized by opponents of the the Taliban policy that prescribes women to follow an Islamic dress code and favors segregation in some public places, including at schools and universities.

At least one woman was reportedly injured after female protesters demanding equal rights for women and men in Afghanistan faced off with the Taliban militants last Saturday. The rally was not greenlighted by the Taliban that banned all demonstrations and slogans unless they are specifically approved by the group and warned about “severe legal consequences” if protesters move to defy the rule.