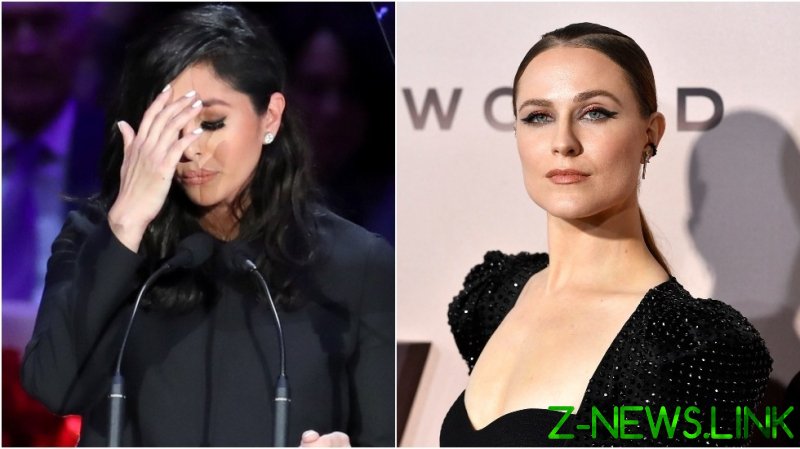 “What has happened is tragic. I am heartbroken for Kobe’s family,” Wood had tweeted last year in the aftermath of the helicopter crash in California which killed Bryant, his 13-year-old daughter Gianna, and seven others.

“He was a sports hero. He was also a rapist. And all of these truths can exist simultaneously.”

Despite the tweet being in existence for more than a year, it has only just been seen by Vanessa Bryant, who this weekend posted her fury at the “vile” comments from the Westworld actress. 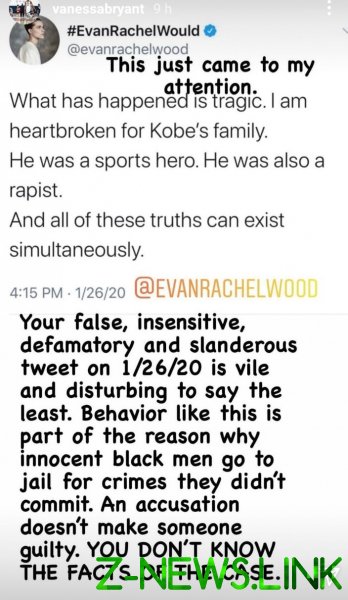 “This just came to my attention,” Bryant wrote on her Instagram stories, sharing a screenshot of Wood’s tweet.

“Your false, insensitive, defamatory and slanderous tweet on 1/26/20 is vile and disturbing to say the least.

“Behavior like this is part of the reason why innocent black men go to jail for crimes they didn’t commit. An accusation doesn’t make someone guilty.

“YOU DON’T KNOW THE FACTS OF THE CASE.”

LA Lakers icon Bryant was accused of sexually assaulting a 19-year-old Colorado hotel employee in 2003, although the charges were later dropped when the woman declined to testify.

She later brought a civil case against Bryant, which was settled out of court in 2005.

Following Bryant’s death at the age of 41, Wood wasn’t the only one to drag up the rape allegations against the star.

On January 29 of last year, film producer Abigail Disney tweeted: “The man was a rapist. Deal with it.”

Vanessa Bryant also shared that tweet with the same message she had sent to Wood. 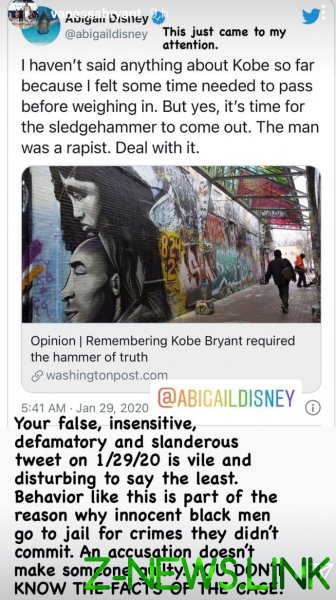 The tweets are along the same lines as a message last year which saw Washington Post reporter Felicia Sonmez get suspended, after she posted a link to a story about Bryant’s rape case just hours after the basketball star’s death.

Sonmez was later reinstated by the paper, but not before receiving a massive backlash including death threats.

Elsewhere, it was reported this weekend that lawyers for Vanessa Bryant had filed a complaint to name and shame the Los Angeles County sheriff’s deputies who shared “unauthorized” photos of her husband and daughter and other victims of the helicopter crash which killed them.

Earlier in February, officials at the US National Transportation Safety Board concluded that helicopter pilot Ara Zobayan had violated safety rules when he decided to fly through thick cloud on the day of the crash.

Zobayan was likely experiencing “spatial disorientation in limited visibility conditions” when he crashed into the hillside in Calabasas, officials said.