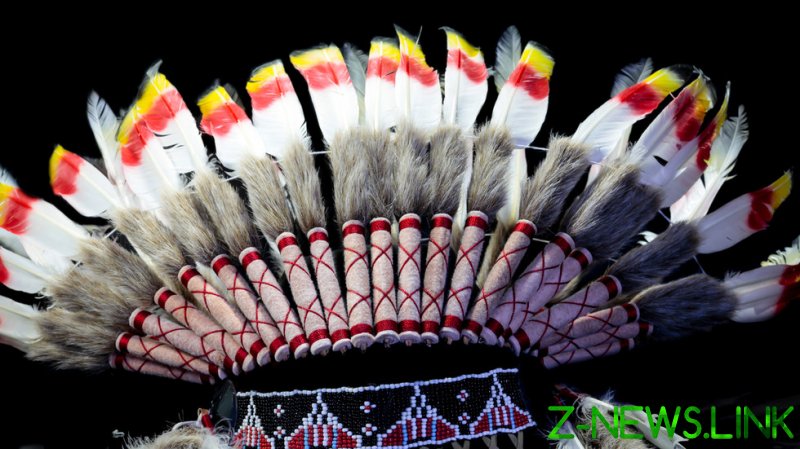 You know that Middle America has finally got its knickerbocker glories in a twist when even Good Housekeeping is telling its waxwork readership how to navigate the vexed issue of “cultural appropriation”.

The bible of soccer moms and petty bourgeois socialites recently informed its devotees on how to not get cancelled by ‘minorities’ such as Native Americans, African Americans or members of the Universal Society of Hinduism – namely by avoiding bindis, Navajo head-dress or enough fake tan to fill Al Jolson’s make-up box.

Personally, I think GH should work on the basics first and tell its core readership to drop the ’80s newsreader hair and shoulder pads, and get themselves real jobs instead of shilling for their husbands’ tax-dodging wheezes. But that’s just me.

However, the mag did rebuke several slebs for their tacky cultural appropriation, from Miley Cyrus – “[she] wore hip hop culture like a costume. Abandoned it. Stereotypes it now” – to Madonna (“I’m inspired and I’m referencing other cultures. That is my right as an artist.”). ’Ark at her! Alas, Jesy Nelson from Little Mix didn’t get a dishonourable mention in the rag, despite being accused of ‘blackfishing’ with NBF Nicki Minaj in her new ‘Boyz’ video. Somehow, Nelson failed to get the memo advising her not to do a Rachel Dolezal. Needless to say, the B-list popster won’t be on Oprah’s couch any time soon.

For those who think they are above ‘identity politics’ or ‘culture wars’, cultural appropriation may seem like tittle tattle. “It’s just a haircut, for chrissakes!” I hear you groan, but dismissing it is easier said than done when the stakes relate to the multi-gazillion dollar fashion, cosmetics, music and entertainment industries. As Kardashian West and other white women have learnt to their reputational cost, many Afrocentric hairstyles aren’t just about aesthetics; scores go back eons and have ethnic, tribal and historical connotations. Getting the peroxide out and sticking your hair in a bun just isn’t the same, Becky.

The trouble is, Middle American squares, just like their stupefyingly boring Middle England cousins, have no idea what’s going on in the real world having bought into the myth that Western civilisation ended in the 1950s. Why do these people think transracialism, on any level, is cool? Only a few months ago, I ran into a white couple in their 40s during a social engagement, who asked me, in all seriousness, what I thought to their idea of rocking up at their friend’s forthcoming fancy dress party kitted out as Jay-Z and Beyonce, complete with Afro hairstyles, bling, Mack Daddy threads and, you guessed it, blackface.

As tempting as it was to reply, “Are you sh***ing me?” I cogitated for a moment and asked them if they thought it was a good idea, given the, er, cultural implications of their ‘look’.

“But we’re really into rap music and we absolutely LOVE Jay-Z and Beyonce,” they shot back, practically in unison. Bless.

I walked away from the encounter not in disbelief, but reminded of the fine line between sincerity and stupidity, and the even thinner one between cultural appropriation and cultural appreciation. Most people – of any class, creed or colour – who get caught out confusing appropriation for appreciation do so not through malice, but through ignorance. But to use a legal principle, ignorance is no defence.

We Brits and Americans like to claim that we’re just “having a laugh” when caught out mocking other people, yet our hegemonies control cultural industrial complexes with such eggshell personalities that the odd joke about flags, ‘feelings’ or even failing football clubs can provoke nationwide meltdowns.

The same fat, male gammonatti that dismisses cultural appropriation as some sort of ethno-girlie problem are the first to cry into their warm beers and soggy meat pies when ‘plastic fans’ appropriate club shirts, galactico players or celebrity managers such as Jose Mourinho, not because of club history, heritage or loyalty but simply because they like the look of their Day-Glo kits or mullet hairdos.

Newcastle United’s £305 million takeover by Saudi Arabia’s sovereign wealth fund, for instance, is just the latest example of the undeniable tension between cultural appropriation and appreciation. This week, Scottish National Party MP John Nicolson called the club’s supporters “numpties” for “dancing around in cod Arabic headdresses”. Such has been the overtly racist appropriation of cartoonish Arab garb that Newcastle United have told fans to stop wearing “tea towels and other home-made headdresses” to matches as a way of “celebrating” the club’s oil-rich new owners. Good luck with that.

Football fans tend to view even the most indefensible behaviour as “ironic” without even understanding what irony is, because in an odd sort of way they’ve been led to believe they’re victims, the poor little guy being rinsed out by wealthy foreign owners who care little for “real fans”. This canard allows said fans to hit back with all manner of abuse, often racist.

Sadly, this ‘ironic’ defence is now being employed by rich, spoilt and well-connected media types who want to cover up their own bigotry by playing the victim card.

British and American comedians David Baddiel and Sarah Silverman, for example, have sought to excuse their use of blackface routines by criticising actors such as Eddie Marsan and Tracey Ullman for donning “Jewface” to play Jewish characters Soly Malinovsky in the BBC period drama, ‘Ridley Road’ and Betty Friedan in the Netflix miniseries, ‘Mrs America’. Neither actor is Jewish.

“Most of the lead actors here, playing Jews, in a story about antisemitism, aren’t Jewish,” Baddiel said when ‘Ridley Road’ was originally cast. “I’m fine with that. But it wouldn’t be fine for the BBC to cast like this with any other minority.”

Mazel tov to all that. But it was totally fine for Baddiel to black up for s**ts and giggles with the sort of racist buffoonery that “any other minority” would never get commissioned on mainstream television, let alone use as a platform to go on to bigger and better things, career-wise. In fact, a black comedian pulling the same stunt would find themselves, if you’ll forgive the pun, blackballed from the industry.

Baddiel has a habit of peddling this sort of double face as a way of rounding on a “hierarchy of racism” – while simultaneously exploiting said hierarchy for his own agenda. His whataboutery concerning Tottenham Hotspur fans’ use of the word ‘Yid’ with everyday racists’ use of the N-word, along with his occasional PR-driven apologia for blacking up is the funniest thing he’s done in years. While seemingly binding the two slurs intersectionally, and making token gestures about his own rancid behaviour, Baddiel is happy to imply, laughably, that black people somehow get an easier ride than Jews in Britain, and thus we should be thankful for his half-contrition.

Such horse-trading of oppressions is not only a joke, it goes to the heart of why so many people get appropriation and appreciation confused or can’t understand why the goalposts keep shifting between what’s righteous and what’s racist. No wonder the average slack-jawed Brit is often left dribbling, “You can’t say [insert ridiculous statement here] as you’ll get accused of being a racist.”

Baddiel has never apologised to former footballer Jason Lee, whom he publicly mocked, or addressed the British black community in any meaningful way. Given his considerable media platform and connections, if he really was contrite, he would’ve explored why Blackface, Jewface and the ugly face of cultural appropriation are historically and contemporarily contentious via a no-brainer documentary on the subject.

Why, I’d even go along with him for the ride, although I doubt Baddiel has the stomach for such a journey of self-discovery, let alone sharing a rental car with someone like me. Nevertheless, ‘When David Met David’ has a certain ring to it. So Baddiel, consider the gauntlet thrown down: get your people to call my people. Just make sure you use the phone, not talking drums. I’d hate for us to get off on the wrong foot.