‘Why didn’t he do that to Khabib?’ UFC star Poirier proves size doesn’t matter as he grapples giant strongman Brian Shaw (VIDEO) 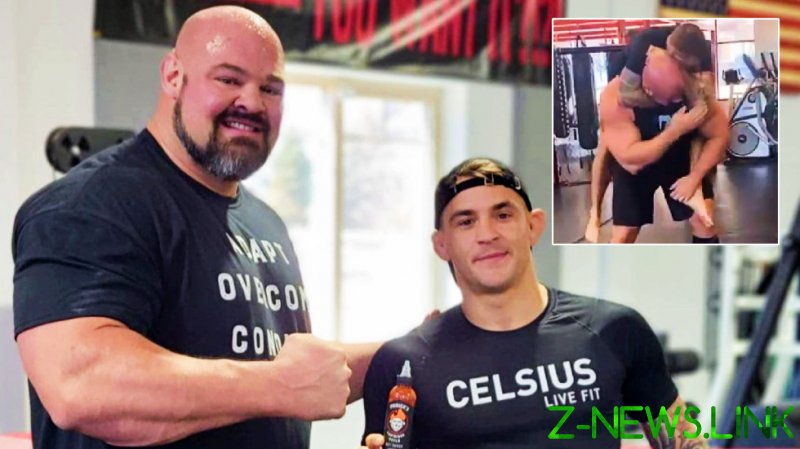 Poirier, who it was confirmed on Saturday will fight Conor McGregor for a third time at UFC 264 on July 10, is well-known for the concussive style of striking that he used so effectively to hand his rival the first TKO defeat of his career in January.

The Louisiana native has more than a few submissions skills up his sleeve, too, boasting seven career submission wins to become the UFC’s top-ranked lightweight.

Now Poirier has shown once again that when two opposing forces meet on the mats, the bigger they come, the harder they will fall.

In footage showing the former interim UFC lightweight champion rolling with world-renowned strongman Shaw, Poirier can be seen putting the 400lb Shaw through his paces before taking his back and sinking in a rear-naked choke submission which quickly coaxes a tap from the American behemoth.

The 27-6 mixed martial artist didn’t have it all his own way, though. Another video released from the session portrays him struggling to escape from underneath the colossal muscleman.

This isn’t the first time that a prominent MMA fighter has tried his hand against one of the world’s strongest men.

Similar footage of McGregor once showed the Irishman sparring with Thor Bjornsson, better known to many for his role as ‘The Mountain’ in HBO’s hit series ‘Game of Thrones’.

Reacting to the clip, some fans questioned why Poirier didn’t use the style of grappling in his world title fight with former champion Khabib Nurmagomedov during their main event scrap at UFC 242 back in September 2019.

“Why didn’t he do that to Khabib?” one fan cheekily asked, while another warned: “If this wasn’t all fun and games, Dustin wouldn’t be able to do anything with that guy”.

A third remarked that Poirier “literally looks like a child on his back“, such was the extreme weight difference in the scene featuring two wholly contrasting athletes.

Poirier won’t have to contend with such an extreme weight handicap in his next fight against McGregor this summer.

But the Irishman will know that he will likely be in for a short evening if Poirier finds himself in a similar position come July 10.