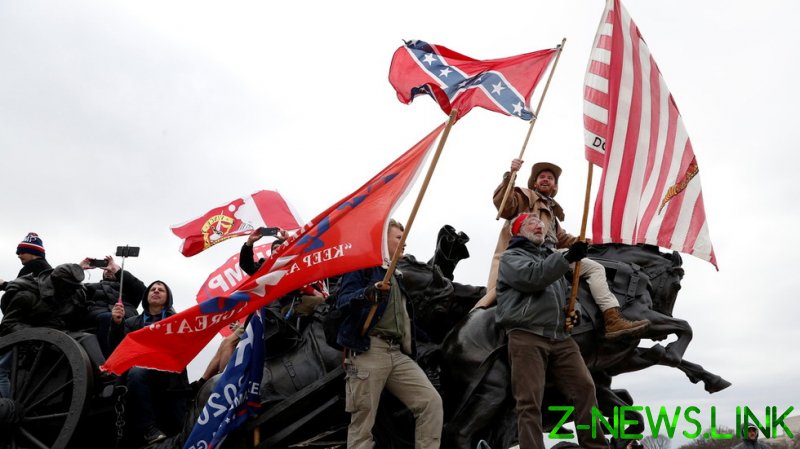 Pelosi’s laptop vanished earlier this month, as an unruly crowd of President Donald Trump’s supporters swept through the US Capitol in Washington DC. The laptop hasn’t been located, but one witness told the FBI that their “former romantic partner,” seen on video footage inside the Capitol, had stolen the laptop and attempted to sell it to Russia’s foreign intelligence service.

The bizarre claim was attached on Sunday to a criminal case against Riley June Williams, a Pennsylvania woman charged with trespassing and disorderly conduct for her role in the protest.

Williams’ former lover – who identified her in video footage from the Capitol – told the FBI that Williams’ friends showed him an additional video, which captured Williams stealing “a laptop computer or hard drive from Speaker Pelosi’s office.” Williams, the former beau alleges, intended to send it “to a friend in Russia, who then planned to sell the device to SVR, Russia’s foreign intelligence service.”

The witness said that the “deal” fell through, and Williams still has the laptop, or has destroyed it.

The FBI hasn’t been able to verify the witness’s Russian conspiracy claims, and the story could be more the work of a jilted lover than a concerned citizen. Williams, according to the affidavit, has left her home in Harrisburg, Pennsylvania, and a warrant is out for her arrest.

With the long shadow of ‘Russiagate’ still hanging over Washington, the FBI is reportedly investigating whether the rioters may have been funded from abroad, while at least one neoliberal think tank has – albeit with zero evidence – accused Russia of orchestrating the chaos at the Capitol. Conspiracy theorists such as former British MP Louise Mensch, meanwhile, pinned the entire debacle on “the Russians,” claiming that Williams was receiving instructions directly from her “Russian handlers.”

The FBI’s investigation reportedly focuses on “payments of $500,000 in bitcoin” sent “to key figures and groups in the alt-right before the riot.” Though dedicated Russiagaters online have blamed Russia for the payments, the donor was found by journalists to be a French conspiracy theorist.

As the investigations continue, the tip against Williams is just one of more than 140,000 received by the FBI, Washington Bureau Chief Steven D’Antuono told the New York Times last week. D’Antuono added that the majority of these tips have come from friends and family members of the rioters. Teenagers have turned in their conservative parents for attending the protest, with one teen telling the Washington Post that her mother’s actions “should have consequences.”