Home / WORLD / WHO chief calls for worldwide pause on vaccine boosters until 2022, to allow ‘every country’ to inoculate 40% of population

WHO chief calls for worldwide pause on vaccine boosters until 2022, to allow ‘every country’ to inoculate 40% of population 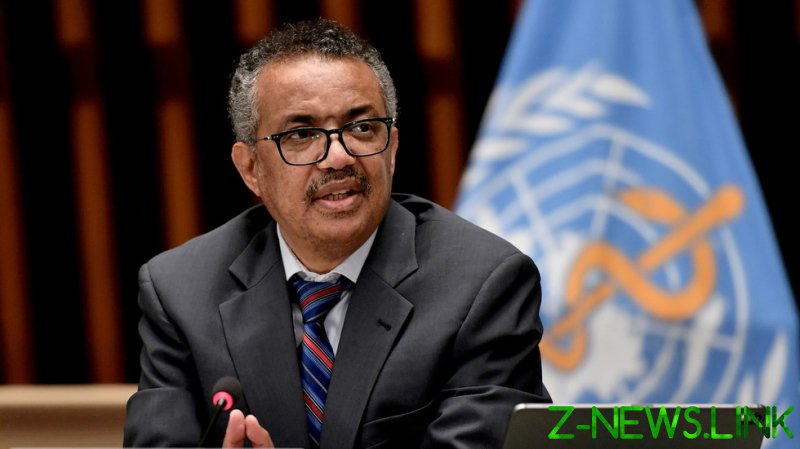 “I’m calling for an extension of the [booster] moratorium until at least the end of the year, to enable every country to vaccinate at least 40% of its population,” Tedros said at a Wednesday briefing. He added that while nearly all wealthier countries had reached the 10% vaccination threshold, and some two-thirds hit the 40% mark, “Not a single low-income country has reached either target.”

The WHO chief acknowledged that there might be a need to administer additional doses to people with compromised immune systems or who are “no longer producing antibodies,” but insisted that, for now, boosters should not be given to those who are relatively healthy and already vaccinated.

Tedros minced no words in addressing Big Pharma firms and their allies in governments around the world, arguing the companies would only deal with states that pay “top-dollar” while poorer nations receive scraps.

“I will not stay silent when companies and countries that control the global supply of vaccines think the world’s poor should be satisfied with leftovers,” he said.

Because manufacturers have prioritized or been legally obliged to fulfill bilateral deals with rich countries willing to pay top-dollar, low income countries have been deprived of the tools to protect their people.

Beyond the agency’s 40% vaccination target set for the end of the year, the WHO chief said he hopes to see 70% inoculated against Covid-19 by the middle of 2022, though suggested booster campaigns beginning across Europe and the US could make that goal more difficult to achieve. “Almost every low-income country is already rolling out the vaccines they have,” he said.

While Tedros already recommended a pause on boosters last month, calling for an “urgent reversal” of roll-outs that had already begun, at the time he urged for a delay only until the end of September, as opposed to the three-month moratorium mentioned on Wednesday.

Despite the WHO’s repeated endorsement for a booster moratorium, the head of the agency’s Europe branch, Hans Kluge, cut against its official position in comments last month, saying a third dose “is not a luxury” and is needed to protect the vulnerable. The statement was at odds with arguments put forward by other WHO officials, who have suggested booster shots are indeed a luxury for high-income nations and would deprive poorer countries of much-needed doses. Tedros himself, meanwhile, has noted that “there is a debate about whether booster shots are effective at all.”

In the United States, booster doses have been approved for those with compromised immune systems, and only for the vaccine developed by Pfizer and BioNTech. Nonetheless, the Joe Biden administration has already announced a full-blown booster campaign and set a hard date for it, calling on all fully-vaccinated adults to receive an additional dose eight months after their last shot starting September 20.

While US health agencies initially backed Biden’s plan in public – citing data that showed declining vaccine-induced immunity over time – some agency heads have reportedly voiced reservations in private, suggesting the White House moved too quickly on its announcement and that regulators still hadn’t reviewed all the necessary data. To date, the Food and Drug Administration has yet to approve universal boosters for any of the three vaccines used in the US, two of which remain authorized on an emergency basis only.