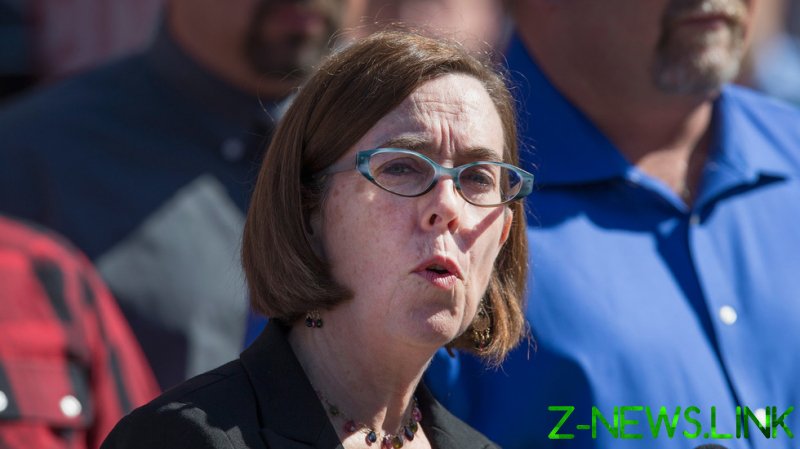 Call me old-fashioned, but in my day ‘helping’ students – of ANY colour – meant giving them a decent education, not treating them like lab rats in a massive social engineering experiment.

Putting her John Hancock on Senate Bill 744 on July 14, the 61-year-old gubernator neither issued a press release about the new legislation nor marked the occasion with a ceremony. Hmm… Instead, according to the Oregonian newspaper, the bill passed into law on the QT, and wasn’t even entered into a legislative database until two weeks after its signing, which is highly unusual, as bills are typically recorded on the same day that they’re signed.

While Brown has been conspicuously silent about the controversial bill, her deputy communications director Charles Boyle issued a statement saying that suspending reading, writing, and maths proficiency requirements, while Oregon develops new graduation standards, would benefit the state’s “Black, Latino, Latina, Latinx, Indigenous, Asian, Pacific Islander, Tribal, and students of colour” because, apparently, “leaders from those communities have advocated time and again for equitable graduation standards, along with expanded learning opportunities and support.”

Now, I’m not an Oregonian, nor an American, for that matter. But as a black man, I feel concerned, angry and insulted that, once again, some bleeding-heart liberal in a position of power is playing the race card at the expense of people like me – letting us ‘POC’ take the rap for somehow dumbing down yet another education system we don’t control, can barely influence and certainly don’t want to change for the worse.

Seriously, are we supposed to believe that these ‘leaders’ lobbied to have exam criteria softened up, because their constituents told them their kids are too stupid to pass basic aptitude tests?

As a Democrat, Brown knows minorities need sucking up to in the post-Trump Biden era. Last summer, Portland, Oregon saw months of sustained demonstrations against its police and ‘systemic racism’ following the murder of George Floyd. For a significantly liberal state of some 4.25 million in which 76% of the population is white, but only 2% is African American, night after night of televised BLM and Antifa protests wasn’t a great look for progressives such as Brown.

But just as in Britain, where the ruling Conservatives’ Commission on Race and Ethnic Disparities report sought to appease underachieving white working-class communities by effectively turning them into a failed ‘ethnic minority’ – thus pandering to a false sense of victimhood – Brown’s signing of Bill 744 is designed to make Oregon’s ethnics feel that their inability to succeed is all down to racism as opposed to, er, maybe watching too much television, wasting time on social media, not reading or studying and generally buying into a white liberal world that seeks to remove personal agency and place control in the hands of, well, ideologues such as herself.

On both sides of the pond, educationalists have been moving the goalposts to accommodate ethnic minorities, white working-class boys, females… in fact, any group that, for one reason or another, has been deemed not to be up to scratch academically. Now, I’m all for making school curricula more ‘relevant’, but this jiggery-pokery, which has resulted in maths being deemed ‘racist’, and unfashionable books being cancelled from school libraries, isn’t designed to improve the lot of ethnic-minority students. It certainly doesn’t boost morale among the poorly paid, overworked and ethnic-minority teachers I know, who have been co-opted into delivering second-rate teaching programmes.

Ultimately, the chief beneficiaries of hypocritical bills such as 744, which kick the educational can down the road for someone else to clean up – for example the healthcare community or the criminal justice system – are second-rate politicians who lack the wit, wisdom and often wherewithal to tackle the real problems that impact on children’s learning. Rather than get to the heart of the social, cultural and economic conditions that contribute to otherwise bright children leaving primary education only to fail miserably in high school, neither left nor right really seems to care about education beyond it being yet another phoney culture-war battleground or a nice little earner for lazy lanyard-wearing desk jockeys.

I actually gave up on lecturing in US and UK universities after witnessing how industrial scale massaging of test results gives too many students a false sense of talent and intellect, just so institutions can keep bums on seats, secure funding and ensure that the promising running back who can barely spell his own name scrapes a pass and thus plays on the team next season.

A self-proclaimed “fierce feminist”, Brown says she’s “committed to centring racial justice in a new vision for community safety” and in her “administration’s agenda”. She has 30 years’ political experience, and as an openly bisexual woman, she’s made history numerous times throughout her career, including becoming the first openly LGBT person to be elected a US state-level secretary of state, and the first openly LGBT person elected governor of a US state.

Brown sounds radical – on paper. But her shrouded signing of Bill 744 is just the latest example of US schools and colleges reducing entry requirements in the name of ‘equity’ while promoting what feels uncomfortably like yet another case of apparatchik liberal racism. Ideologically, Brown may well have the best interests of minorities at heart, and perhaps sees Bill 744 as back-door positive discrimination. No one needs to tell me how rigged most industries are in the UK and the US. Just look at the “About Us” page of any corporation, or media, cultural or state sector organisation website to see who’s running the show and who the real gatekeepers are.

But by dumbing down educational standards, Brown is effectively saying that minorities are too stupid to reach Oregon’s educational standards – a notion that plays right back into the hands of reactionary halfwits who need to promote bogus supremacist ideas so that millions of credulous Brits and Americans can feel good about themselves and keep voting for their puppet masters.

Brown is about as woke as it gets in terms of mainstream US politics. By being on the American left and playing the race card she probably thinks she’s on the ‘right side of history’. But as the old saying goes, ‘Don’t piss down my back and tell me it’s raining.’ The more loony liberals indulge in shifty tactics like lowering the educational bar to the dumbest common denominator, cancelling whole subjects, giving everyone a medal even if they can’t cross the finish line or pronoun’ing us all with ‘them’, and calling this nonsense ‘equality’, the more ethnic minorities, myself included, will just up sticks and educate our children abroad or in private schools where the focus is on results, not reprogramming – a situation that can only exacerbate the sort of social and ethnic division that Ms Brown claims she’s fighting against.