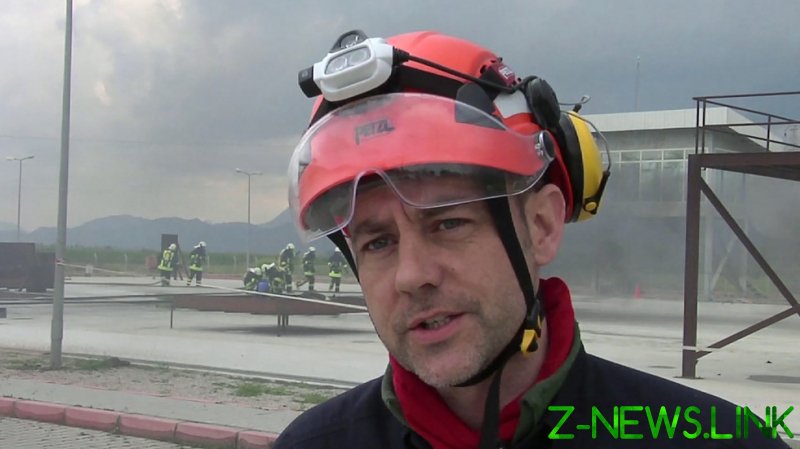 The lengthy Daily Mail article, published December 20, reinforced the established, idolatrous fable of his life and death, while also adding significant new strands to the narrative.

While prior mainstream apologias attributed his untimely demise primarily to an online “disinformation campaign,” without attempting to tackle the riddle of how a battle-hardened military veteran could be so deleteriously impacted by baseless social media slurs, the Mail’s offering primarily focuses instead on suggestions of financial impropriety on the part of Le Mesurier as the head of Mayday Rescue, the White Helmets’ parent organization.

These claims had circulated for some time, and were seemingly vindicated by a De Volkskrant long-read published in July, which revealed how three days prior to his death, Le Mesurier confessed via email to the Helmets’ international donors, which funded the group to the tune of hundreds of millions over the years, that he was guilty of fraud, tax evasion, and other grave misdeeds, and urged recipients to prevent a second forensic audit which would likely reveal further “mistakes and internal failures.”

A 6,000 word Guardian billet-doux covered the charges in some detail, framing them as malicious fabrications on the part of Mayday Chief Financial Officer (CFO) Johan Eleveld. The Mail goes far further though, granting Le Mesurier’s widow Emma Winberg an unchallenged platform to accuse Eleveld of “being responsible for James’ death,” in the process potentially perpetrating libel against him.

“He created the circumstances that led to my husband’s death, he destroyed my life, and he devastated the wonderful organization James built,” she fulminates.

At the center of De Volkskrant’s explosive exposé was the story of how US$50,000 in cash that Le Mesurier used in part to fund a mission to extract White Helmets from Southern Syria in July 2018, had gone missing. Dutch audit firm SMK – hired at Eleveld’s request – subsequently found Le Mesurier forged receipts showing the remainder of the funds had been stored in an Istanbul safe, when in reality the money was never seen again.

Winberg – a veteran UK diplomat-turned-psyops specialist – frames this shocking deceit as a “single mistake” on the part of Le Mesurier, a “misjudgment” Eleveld “exploited” to “devastating effect.” The apparent motive? The Mayday CFO wished to “avoid his imminent dismissal and supplant James as head of Mayday,” after the Helmets founder expressed an intention to sack him for incompetence.

The dastardly Dutchman then “deliberately highlighted the false-document fraud” to Dutch auditors, she claims, and “magnified its seriousness” to Le Mesurier at a November 7 meeting, four days before his death. It was this rendeszvous which spurred Le Mesurier to send his confessional email to donor countries – and also, Winberg suggests, pushed her husband over the edge, given he was “already in a fragile state” at the time.

For his part, Eleveld “vehemently denies” driving Le Mesurier to suicide, telling the Mail his only objective was to save his employer from legal action from the Netherlands authorities, where one of the three Mayday entities founded by Le Mesurier was based. He also notes that given his role, he would be personally liable for any financial misconduct by the company, placing his home and assets at potential risk.

“Everyone was angry at me because I turned off the money tap. James is the one who fully understood before he committed suicide that I tried to protect him. I have a really warm heart for James… My only concern was to not let the organization be harmed,” Eleveld told the outlet.

‘I owe you an apology’

One needn’t be a cynic to suggest Eleveld’s version of events is far more credible than the account of Winberg. After all, why wouldn’t a CFO “deliberately” raise concerns about serious criminal conduct on the part of their employer to auditors, and how could Le Mesurier, if entirely blameless, be so convinced he’d committed fraud he’d go to the extent of emailing the Helmets’ financial backers admitting as much if the charge was false?

On the latter point, even the Mail cringe-inducingly acknowledges the prospect of “a charismatic buccaneer” like Le Mesurier being “laid low by an ambitious bean-counter” is “hardly credible.”

Moreover though, a WhatsApp message sent by Le Mesurier on November 9 2019 – two days prior to his death – to Eleveld, divulged as a result of an employment dispute brought by Mayday against Eleveld in Dutch courts at the start of 2020, seems to vindicate the former Mayday CFO’s account of Le Mesurier having “understood” his motives were benign and constructive.

“I owe you a huge apology. As the implications of what’s happening settles in, I’ve begun to realize that I saw you as an obstacle to what I believed the mission was,” Le Mesurier wrote. “You saw the risks and tried to explain them to me, and tried to resolve them. I was utterly convinced – even after SMK spoke to me – that it was their lack of understanding of the Syria context and I blamed you for what I perceived as leading them to the issues that they found.”

On top of missing money though, there’s also the issue of the sky-high salaries Le Mesurier and his wife were paying themselves. In 2017, he informed the Netherlands’ Ministry of Foreign Affairs he was receiving €24,000 per month, before cash bonuses – considerably higher than the designated salary ceiling at other Dutch government-funded enterprises, and several orders of magnitude more than the US$150 per month Helmets members received.

Ironically, the Mail notes the paltry sums Mayday’s operatives on-the-ground were paid, quoting Winberg as saying Le Mesurier “argued harder than anyone else for stipend rises” for the group, and “would have paid them anything he could.” The question of why he didn’t at any point in the six years he ran the group is unasked, and unanswered.

Le Mesurier and Winberg may have profited from the Helmets’ budget in other ways too. In April 2017, the pair founded Dutch-based company R3covery BV. Its now-dormant, minimalist website states the firm “specialises in developing and implementing resilience solutions in stabilisation environments,” but its unclear what if any business R3covery ever conducted, as it never filed accounts, in breach of Dutch law, and Winberg has repeatedly refused to answer questions about R3covery’s operations and purpose.

Le Mesurier resigned as director in August 2018, while Winberg remained in post until its October 2020 dissolution. A possible motive for the shadowy company’s establishment could’ve been the purchase of “resilience solutions in stabilisation environments” by Mayday, allowing Le Mesurier to funnel cash out of the organization, by “buying” services from himself.

Whatever the truth of the matter, it’s known the couple divided their time between three lavish properties – a €1.6 million apartment in Amsterdam, an Ottoman-era villa on the Turkish island of Büyükada the pair spent vast sums renovating, and a three-storey 1,640 square-foot house in central Istanbul.

In September, it was reported the residence had spent seven months untenanted due to its intimate connection with Le Mesurier’s ever-mysterious death, forcing estate agents to drop the monthly rent from around £6,200 to £5,170.

Le Mesurier’s other business ventures also indicate he may have sensed the walls closing in far in advance of Eleveld’s warnings. In January 2019, he registered My Zahara Limited at an address in northern England belonging to a company formation agent which specialises in compliance with money laundering regulations.

This strongly suggests he intended to use the firm to repatriate money from foreign Mayday entities, perhaps as a prelude to fleeing Turkey altogether. After all, he reportedly told friends and colleagues Mayday’s “business” in the country was “over,” some time before his allegedly fateful summit with Eleveld.