When the city falls asleep…the drones wake up: FAA’s new drone rules to allow commercial operators to fly at night 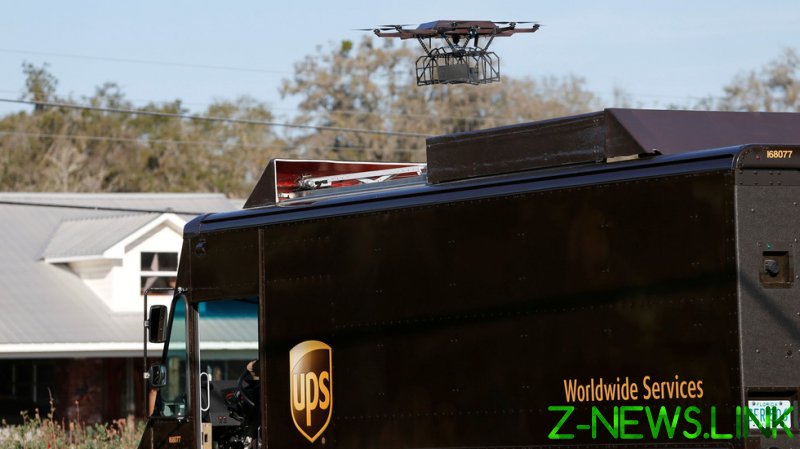 The Federal Aviation Administration (FAA) announced the new guidelines on Monday, aimed to “address safety and security concerns” around the unmanned vehicles and “make way for the further integration of drones into our airspace,” FAA administrator Steve Dickson said, adding that the rules “get us closer to the day when we will more routinely see drone operations such as the delivery of packages.”

The most major rule changes pertain to the use of drones at night, particularly when they are to fly over people on the ground, as well as remote ID requirements. While drones will now be permitted to fly after dark under certain conditions – laying the ground for nighttime package deliveries by the likes of Amazon – operators will soon be required to attach a “remote ID broadcast module” to any craft weighing more than 0.55 pounds (0.25kg).

Though the previous framework only required drones to be labeled with a registration number, the new rules will force operators to broadcast not only the location of the vehicle, but also their own location on the ground, allowing law enforcement to keep tabs on who is flying what at any given time.

“Remote ID provides identification of drones in flight as well as the location of their control stations, providing crucial information to our national security agencies and law enforcement partners, and other officials charged with ensuring public safety,” the FAA said in its press release.

The remote ID requirement will come into force in 2022 for new drones, while existing craft will have to be retrofitted with the broadcasting tech by 2023. The rules apply to commercial operators as much as they do recreational pilots, even those flying indoors.

The new rules will likely be a boon to e-commerce firms and companies involved in package delivery, opening up US airspace for round-the-clock parcel drop-offs.

Not everybody was excited about the concept – once confined to science fiction – becoming reality, with some commenters arguing that the drones will have to be equipped with lights during their nocturnal excursions and may disturb citizens peacefully sleeping below with intrusive humming noises.

Others have sounded privacy concerns. “Drones flying above you when you walk or drive, drones with cameras flying outside all the windows of your home at night. Great! Seems reasonable, what could possibly go wrong?” another observer tweeted.

The newly released guidelines did not sit well with hobbyists and those flying for leisure, who  took to the web to blast the FAA framework, one deeming it “another nail in the coffin” for small drone operators.

“This makes it cost prohibitive for the small hobby/fun flier,” the commenter went on, adding “retrofitting is costly” and that the “FAA took the fun away.”

Others noted a lack of clarity in the guidelines, some asking how the rules would apply to their individual case, while another demanded to know whether “anyone” would have access to the ID broadcasts, “or just police?”

Despite the protests, some self-identified operators said they breathed a “sigh of relief” after the new rules were announced, given that the FAA previously mulled a requirement that would have forced pilots to broadcast their drones’ IDs to an internet network. The framework announced on Monday contains no such requirement.

Over the summer, the FAA gave the green light to e-retailer giant Amazon to operate its drones beyond pilots’ “visual line of sight,” clearing the way for a fully “autonomous” delivery service, with the company ultimately aiming at 30-minute drop-off times for online orders. Before a full-scale roll-out, however, initial deliveries were restricted to low-population density areas, and only for packages five pounds or lighter. The United Postal Service and Wing – owned by Google’s parent firm, Alphabet – have similarly secured FAA approval for their own drone deliveries.