‘What a cracking try’: Rugby star Lawrence scores hilarious points for England as US opponent pulls down shorts (VIDEO) 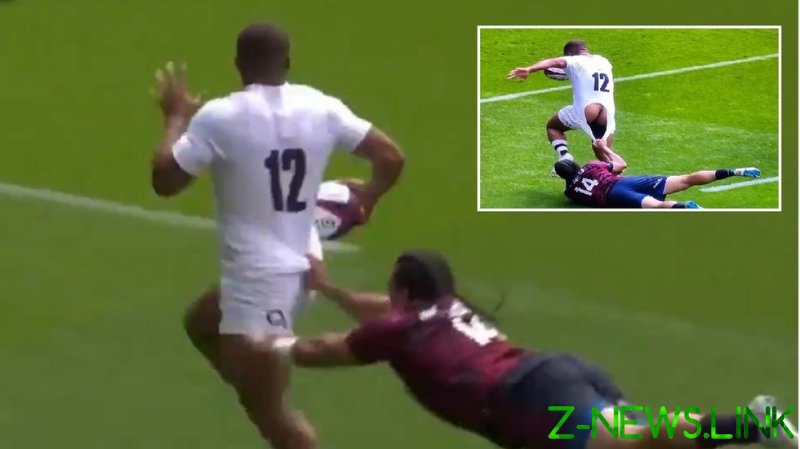 The incident occurred around 15 minutes into the match, with England missing an array of stars currently playing with the British & Irish Lions.

Not just for it being the home side’s first outing since losing to Ireland in the Six Nations, the afternoon ended up being pretty memorable for a moment that is already going viral on the internet.

Failing to contain the Worcester Warriors powerhouse on a sprint down the wing, Mikey Teo grabbed at Lawrence’s shorts to briefly reveal his behind to a laughing crowd of 10,000 punters.

Seeing the funny side of things, Lawrence got up off the ground also chuckling after completing his try, and tapped Teo on the hand in a show of respect for his efforts in the affair that finished 43-27.

On social media, onlookers were just as amused as those inside the iconic rugby ground, and left comments on posts containing the clips and captions such as: “Cheeky try from Ollie Lawrence… before the watershed too.”

“He’ll be over the moon with that try,” commented one punter.

“What a cracking try,” said another.

“Bum deal for the defender,” it was also quipped.

More analytical, a rugby fan said: “That was hysterical, and demonstrates the power in his legs – even the barmaid laughed out loud. Once he learns to defend, he’ll be OK.”