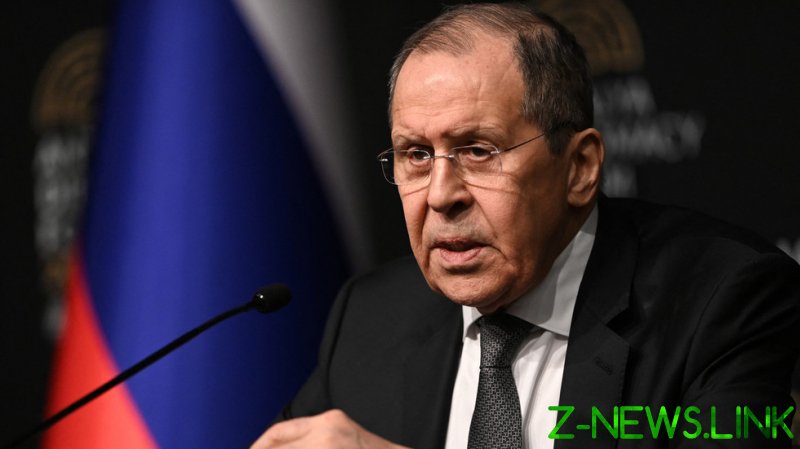 Russia believes the West is enabling ‘hysteria’ around the alleged mass killings in the Ukrainian town of Bucha to derail the peace talks between Moscow and Kiev, Foreign Minister Sergey Lavrov claimed on Tuesday.

The purported events in the town, which he referred to as a ‘provocation,’ have been introduced just as progress was being made at the peace negotiations in Istanbul, he added.

“We tend to think that the reason lies in the desire to find a reason to disrupt the ongoing negotiations. And to do it exactly at the moment when, as they say, the light, even if not very bright, but nevertheless, began to dawn.”

“On March 29, for the first time in the entire period of contacts between our delegations, the Ukrainian side proposed a written vision of how the treaty could look in terms of the status of Ukraine and security guarantees,” the minister said.

According to Lavrov, in the course of negotiations with Russia, Kiev had “for the first time put on paper” its readiness to declare itself neutral, not aligned to any bloc and non-nuclear. What’s more, he insisted, the Ukrainians had formalized a refusal to deploy the weapons of foreign states on their territory, or to conduct exercises there with the participation of a foreign military without the consent of all guarantor states of the future treaty, including Russia.

The security guarantees provided by the agreement, Lavrov argued, would have completely ruled out NATO’s eastward expansion and ensured “indivisible security on the European continent.” In addition, the minister added, the Ukrainian side itself wrote down in the draft of the main provisions that security guarantees would not apply to Crimea and the Donbass, a move that Lavrov dubbed as “progress.”

“Once again we want to urge those who are leading the actions of Kiev, and we know who they are, to still realize their responsibility for security in Europe … Russia is ready for this conversation but, in order for us to have real progress and not the appearance of progress, we insist that an unambiguous signal be sent to Kiev not to engage in sabotage, otherwise we risk repeating the fate of the Minsk agreements and we will never agree to this,” the minister said.

After the withdrawal of Russian troops from Bucha, hundreds of murdered civilians were discovered in the town north of Kiev. Ukraine blames the massacre on Russian troops, who had occupied the area until recently, but Moscow denies this. While Western politicians sided with Ukraine on the matter, China issued a reminder that an investigation is necessary.

Ukraine signaled that it is still interested in a diplomatic settlement of differences with Russia. According to Ukrainian President Volodymyr Zelensky, a peace agreement between Kiev and Moscow is possible. “Yes, because Ukraine must find peace. We are in Europe of the 21st century. We will continue our diplomatic and military efforts,” he said while visiting Bucha on Monday.

Earlier, on March 29, another round of negotiations between Moscow and Kiev took place in Istanbul. Prior to this, representatives of the two held three face-to-face meetings in Belarus. Negotiations started on February 28 in the Gomel region. They then continued on March 3 and 7 in Belovezhskaya Pushcha. The talks continued from there via video link.