Home / WORLD / ‘We refuse to be the vaccination police’: San Francisco’s In-N-Out burger joint seethes over vaccine mandate after closure

‘We refuse to be the vaccination police’: San Francisco’s In-N-Out burger joint seethes over vaccine mandate after closure 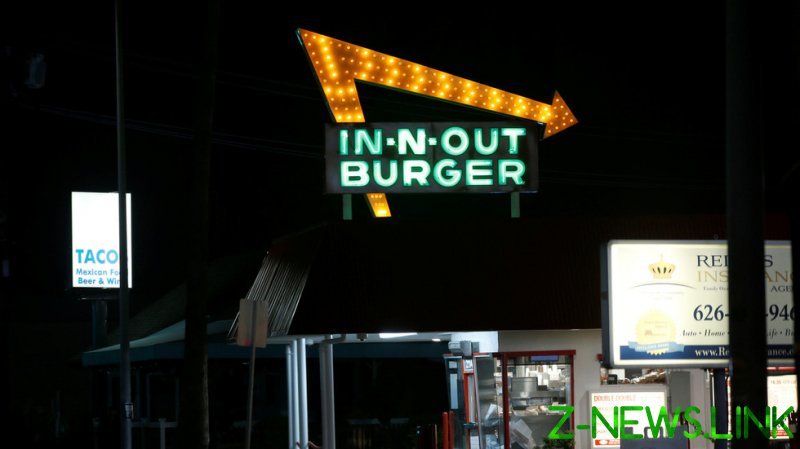 The only In-N-Out burger restaurant in San Francisco has made national headlines, fueling an ongoing debate over vaccine passports, after it refused to enforce the city’s strict vaccine mandate.

The location was temporarily shut down on October 14, after it repeatedly ran afoul of the order, according to the San Francisco Department of Public Health. Inspectors said they alerted the burger joint’s representatives of the need to check customers’ vaccination status “multiple times,” but to no avail.

After finding the establishment in non-compliance with the order during a raid on September 24, the officials returned on October 6 only to discover that the defiant restaurant was “still in violation of the health order,” the department said, as cited by a local CBS News affiliate.

Under the mandate, in effect since August, restaurants, gyms, bars, concert halls and several other indoor businesses must post signs reminding customers of the need to be fully vaccinated against Covid-19 to be granted entry. The affected companies are expected to verify the guests’ vaccination status themselves.

In-N-Out claimed that while it complied with part of the order that required indoor businesses to relay local vaccination rules through appropriate “signage,” the restaurant insisted it would not “segregate customers into those who may be served and those why may not, whether based on the documentation they carry, or any other reason.”

Pushing back against the sweeping vaccination order in a statement on Tuesday, the fast food chain’s chief legal and business officer Arnie Wensinger argued that the mandate was an example of “clear governmental overreach,” calling it “intrusive, improper, and offensive.”

“We refuse to become the vaccination police for any government,” he quipped.

The restaurant has since been partially reopened, but is not serving customers indoors.

In-N-Out’s staunch opposition to the vaccine mandate has drawn praise from opponents of mandatory jabs and indignation from proponents of the measure.

Conservatives and other opponents of the harsh restrictions, on the other hand, commended the chain for standing up to what they see as discrimination based on the medical information.