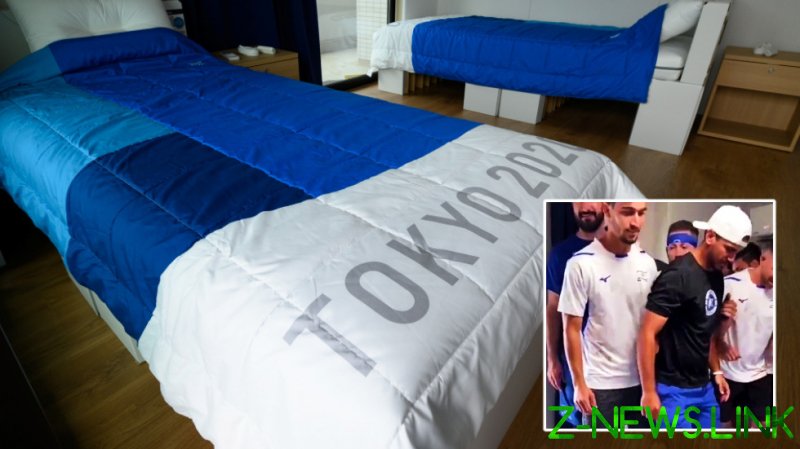 With a few exceptions, each of the 10,000+ athletes competing in this year’s Games were assigned a bed made almost entirely from cardboard in which to rest up in their bid for Olympic glory.

Rumors quickly spread that officials had invested in these temporary beds in a bid to discourage sex among athletes, thereby helping to prevent any unwanted outbreaks of Covid-19 in the Olympic village.

Athletes were also handed contraception upon arrival at their temporary accommodation at the Harumi waterfront district of Tokyo.

This gossip was quickly shut down by Olympic officials, who indicated that the beds were designed to be made from entirely recyclable material so that they could be ethically disposed of after the event, rather than representing an attempt to maintain chastity amongst competitors – and added that they can support arond 440lbs of weight.

Still, though, the cardboard beds have quickly become lore in these Tokyo Olympics, with this new generation of athletes only too happy to use them as props in all manner of social media content.

But Team Israel, who did just that, have woken up to some heat from Olympic officials after they uploaded a video to TikTok to demonstrate how many members of their Olympic baseball squad could stand on one of these beds before it collapsed.

The answer – when it came to the Israeli athletes, anyway – was nine, but it led to furious accusation that they are disrespecting their hosts by destroying furniture which was assigned to them.

“We meant no disrespect and just wanted to show off how effective and sturdy the beds are in the Olympic village,” said baseball player Ben Wanger.

“We actually enjoy sleeping on these beds and think they are a great and sustainable option for future Olympics.”

Israel team manager Peter Kurz doubled down on the apology, saying: “The players committed a childish prank. They apologized and expressed remorse over the mischievous act.”

This censure caps an up-and-down week for the Israeli team, and comes just days after they won their first ever Olympic match against Mexico.