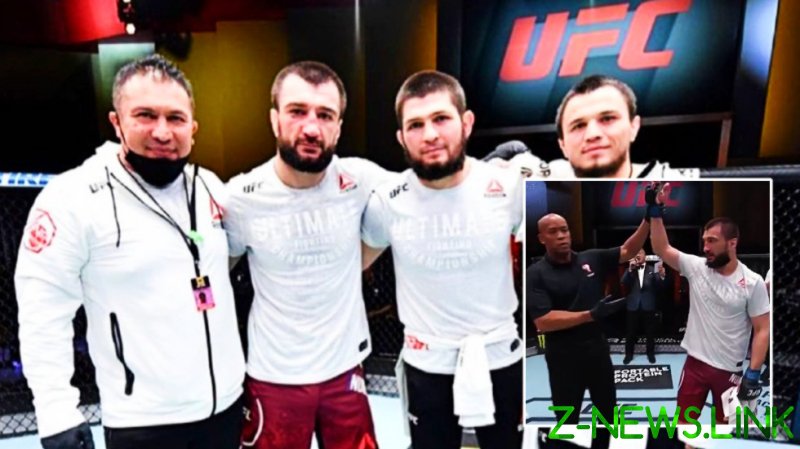 Appearing for the first time since losing on his UFC debut in November 2019, the welterweight made light of Gooden’s pre-bout claims that all Russian fighters had the same reliance on going to ground, mixing it up while appearing to wobble his opponent on a few occasions.

Nurmagomedov had cheekily suggested that Gooden should take up underwater chess as an alternative sport after hearing about his generalizations, and his opponent had also directed a barrage of crude insults towards the Russian’s family in a futile attempt to antagonize him in the build-up.

If there had been an issue for Nurmagomedov in fight week, it was perhaps his struggle to make weight, helped by his illustrious cousin, who revealed that he had stayed up late into the night to keep his relative company while he went through the cutting rituals required to balance the scales.

The former lightweight king clearly played a high-profile role during the fight, offering Nurmagomedov advice and instructions on his way to victory.

“Khabib getting that coach of the year,” wrote fellow UFC welterweight Belal Muhammad on Twitter, adding that Nurmagomedov had produced a “great performance” that “showed a little bit of everything”.

Speaking to RT Sport ahead of the fight, Nurmagomedov confirmed that Khabib took the lead role in some training sessions during the week, although he emphasized that Javier Mendez, the trainer who guided Khabib to some of his greatest victories, retained the final say during training camps.

Nurmagomedov clearly has a close relationship with Mendez, sharing playful social media videos with the coach as well as sessions alongside former champion Daniel Cormier, who dubbed him the ‘Dagestani gangster’.

Speaking before the fight, Mendez published a photo of Nurmagomedov bearing his nickname on a t-shirt, accompanied by the immortal phrase “father’s plan” – words synonymous with his former mentor and Khabib’s late father, Abdulmanap.

“Dagestan Gangster is going to battle today in the UFC,” wrote Mendez on Instagram. “This guy is family. Proud of this guy.”

Khabib used his account, which has almost 28 million followers, to share a photo of the team in the immediate aftermath of what he described as “another big win for our team.”

“We win together and we lose together,” he added. “My brothers – everything for me.

“We are proud of you, brother. We know you can do even better. We are blessed with our coach.

“He is the best in the world. Thank you for everything, coach. We love you.”

Watching Nurmagomedov scrap on the undercard of the headline fight between heavyweights Stipe Miocic and Francis Ngannou, a fan said: “Can’t imagine how incredibly hard it must be for Abubakar Nurmagomedov to go in the octagon everytime.

“Not only because of that family name, but also because he’s Khabib’s first cousin. Happy he got the win today. Looked dominant on the feet and on the ground.”